Do Laws That Ban Texting While Driving Make The Road a Safer Place…or Worse? 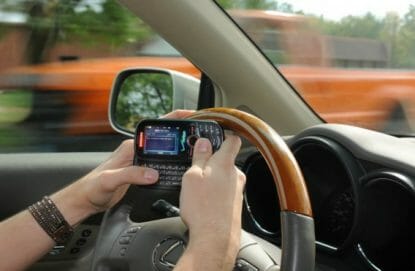 The study was part of a project called Generation tXt, developed and conducted by Oklahoma students and advised by faculty from the University of Oklahoma School of Community Medicine. Thirty students ages 15-19 participated in the study, and nearly 60 of them had been driving less than a year. Using stimulators, teens drove under three conditions: 1) without a cell phone, 2) texting with the phone hidden so they had to look down to see texts and 3) texting with the phone in a position of their choice. The simulators recorded unintentional lane shifts, speeding, crashes/near crashes and other infractions.

“These data demonstrate that there is no ‘safe’ or ‘better’ position that makes texting less dangerous,” said Glade Inhofe, the high school student and lead author.

In fact, it appears that it’s even more unsafe when the phone is hidden.

Bottom line: Texting while driving is dangerous! Don’t do it!