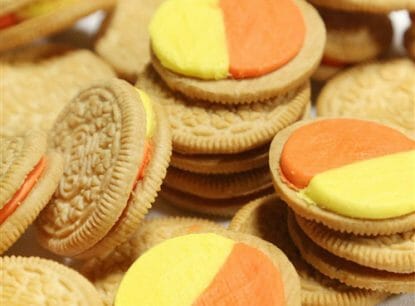 It’s a half-orange, half-yellow frosting layer snuggled between two golden Oreo cookies…yum? So far, the Candy Corn Oreo has received mixed reviews, which isn’t surprising considering candy corn is considered to be one of the least enjoyed Halloween candies. In fact, a TODAY.com poll from last year of more than 47,000 people found that it was the second most hated candy! Will the golden wafers save it?

You won’t find them everywhere; Krafts Food (owner of Nabisco) confirmed that the limited-edition Oreos will be available exclusively at Target stores, and only for the Halloween season.

A golden Oreo filled with “candy corn flavor creme”? You probably have to be a real candy corn enthusiast to enjoy this one.

What do you think: Does it sound delicious, or does the thought of the sickly sweet candy spread between cookies make your teeth hurt?

This entry was posted in Food & Recipes, Halloween