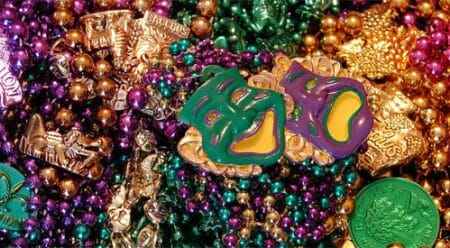 (PCM) Happy Mardi Gras or Fat Tuesday!  Mardi Gras is the cultural celebration in preparation prior to the fasting season of Lent!  The holiday, heavily celebrated in New Orleans, consists of many parades, dancing, wearing costumes, overturning social conventions and general fun and debauchery.

According to Wikipedia, Mardi Gras arrived in North America as a French Catholic tradition with the Le Moyne brothers, Pierre Le Moyne d’Iberville and Jean-Baptiste Le Moyne de Bienville, in the late 17th century, when King Louis XIV sent the pair to defend France’s claim on the territory of Louisiane, which included what are now the U.S. states of Alabama, Mississippi, and Louisiana.

In 1723, the capital of Louisiana was moved to New Orleans, founded in 1718. The first Mardi Gras parade held in New Orleans is recorded to have taken place in 1837. The tradition in New Orleans expanded to the point that it became synonymous with the city in popular perception, and embraced by residents of New Orleans beyond those of French or Catholic heritage. Mardi Gras celebrations are part of the basis of the slogan, Laissez les bons temps rouler, (Let the good times roll). 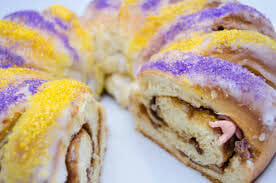 Another Mardi Gras tradition is the King Cake. For those that don’t know a King Cake is traditionally a braided bread like cake often baked with cinnamon swirls and light frosted with confectioners sugar icing and decorated with the traditional Mardi Gras colors of purple, gold and green.

Traditionally a small plastic baby is baked into the King Cake as well and the person who gets the baby in his or her slice of cake is said to be blessed with luck and prosperity throughout the year and they must provide the King Cake for next year’s celebration.

Below find a fabulous King Cake recipe that was featured in Southern Living:

Cake Preparation:
Cook first 4 ingredients in a medium saucepan over low heat, stirring often, until butter melts. Set aside, and cool mixture to 100° to 110°.

Turn dough out onto a lightly floured surface; knead until smooth and elastic (about 10 minutes). Place in a well-greased bowl, turning to grease top.

Cover and let rise in a warm place (85°), free from drafts, 1 hour or until dough is doubled in bulk.

Punch down dough, and divide in half. Roll each portion into a 22- x 12-inch rectangle. Spread 1/3 cup softened butter evenly on each rectangle, leaving a 1-inch border. Stir together 1/2 cup sugar and cinnamon, and sprinkle evenly over butter on each rectangle.

Roll up each dough rectangle, jelly-roll fashion, starting at 1 long side. Place one dough roll, seam side down, on a lightly greased baking sheet. Bring ends of roll together to form an oval ring, moistening and pinching edges together to seal. Repeat with second dough roll.

Also, if you can’t be in New Orleans to celebrate Mardi Gras, don’t fret! You can join the party from the comfort of your own home with Earthcam! Take part in the festivities with EarthCam’s live streaming webcams, regardless of your location.