Teen’s Tweets Get Her Fired From A Job Before She Even Started!

(PCM) A Texas teen who uses the Twitter handle @Cella managed to get herself fired from a job at Jet’s Pizza before she even started by posting a series of tweets slamming her newly obtained job.

The teen posted on the following message on Twitter which read “Ew I start this f**k a** job tomorrow” followed by several thumbs down emoitcons.  She claims that she had just been told how terrible of a place Jet’s is to work, which led to her disdain on social media.

Well,  the teen never got the chance to find out if this was true or not because after the tweet was posted she received a response for the store manager Robert Waple, who promptly fired her right there on Twitter.

Waple posted the following message to @Cella which read “@Cellla_ And…no you don’t start that FA job today! I just fired you! Good luck with your no money, no job life!” He was also sure to add insult to injury saying that she of course would be missing out on all that delicious pizza for lunch.  Ouch! 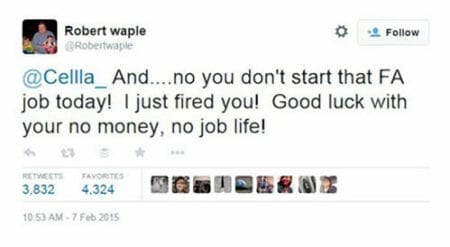 @Cella responded by tweeting out “I got fired over Twitter” with a bunch of crying face emoticons.  Probably better off in the long run, as many former employees of Jet’s took this as an opportunity to trash the particular franchise, as well as, call Waple a few choice names along the way.

This entry was posted in Debatable, I Love Food!, Lifestyle, News