Harry Styles Urges Fans Not To Go To SeaWorld 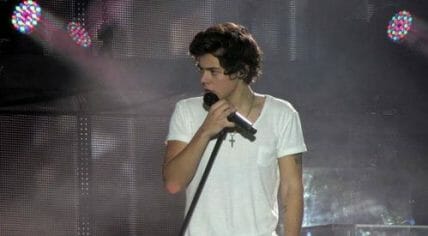 (PCM) In the years since the SeaWorld-condemning documentaries The Cove and Blackfish alerted the public to the horrible mistreatment of sea life in the aquatic theme parks, the chain of marine mammal parks has been suffering from a decrease in park attendance and revenue.

Despite launching a promotional campaign to improve its public image, SeaWorld is continuing to struggle with backlash, and now they’ve received another blow in the form of a One Direction concert.

On Thursday, July 9th, at a concert in San Diego, California, One Direction member Harry Styles took a moment to urge the band’s fans to avoid SeaWorld. The singer briefly paused from performing and asked the fans in attendance: “Does anybody like dolphins?” before telling everyone to “not go to SeaWorld.”

Maisie Williams of HBO’s Game of Thrones was in attendance at the concert and, as an avid supporter of The Dolphin Project, posted a video of Styles’s plea to Instagram, echoing his words to her 1.2 million followers.

You heard him ladies and gents. Don’t go to sea world🚨🚨🚨 @harrystyles

PETA, another fan of Harry’s move, applauded the musician on its website for taking a stance.

SeaWorld on the other hand was not too happy about the popstar’s words, posting the following public letter to Styles:

“We’ve seen a concert clip of you urging your fans not to visit SeaWorld. We want you to know we love dolphins too. We care for the animals in our parks like we would our own family. We are committed to making sure their lives are enriching and they are continually engaged socially, mentally and physically. And, we also care for dolphins in the wild.

“In fact, SeaWorld has rescued more than 480 whales and dolphins. Right now we are caring for a wild dolphin that we rescued several weeks ago. This animal would have died without our help. Our team is with this animal 24 hours a day, and has walked alongside him and cradled him to help him stay afloat. Our goal with him is the same as with any rescued animal: rehabilitate and return him to the wild.

We invite you to see for yourself, and then decide based on facts. We are happy to open our doors, take you behind the scenes, and have our trainers and vets answer any questions you have.

Your friends at SeaWorld”

This entry was posted in Celebrity