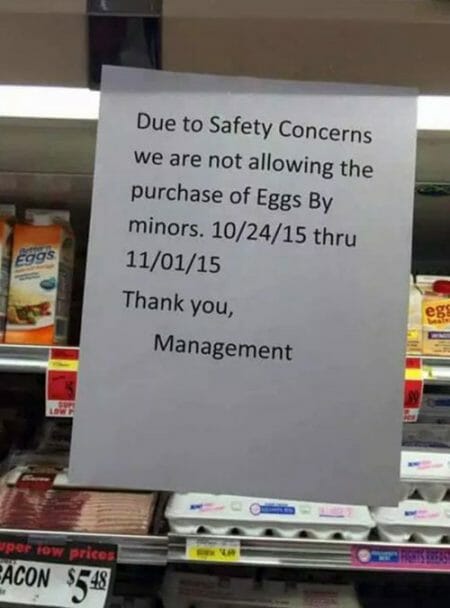 (PCM) We all know what can happen when you tell a teenager they can’t do something, right? Majority of the time it only makes them want to do it more!  Pennsylvania grocery chain Redner’s decided to take their chances and have posted signs around their stores banning minors from purchasing eggs during the week of Halloween from 10/24 thru 11/01.

While we are only learning about this attempt to thwart teens from partaking in a Mischief Night egging now, several sources claim that this egg ban has been in place in Redner’s stores for the last eight years. Mostly, the signs which are posted in the store’s dairy department are doing nothing more than getting a few laughs out of the customers. If anything at all they are driving egg purchases straight to their competitors.  Also, who is to say that adults don’t partake in some Mischief Night pranks as well?

The egg ban policy also makes a broad assumption that anyone under the age of 18 would partake in the destruction or damage to someone else’s property by tossing the raw eggs. Not to mention if teens really want to get their hands on some eggs there are more than enough other stores in the area where they can get their hands on a carton or two! Redner’s Markets, which is headquartered in Reading, Pa., operates stores in Delaware, Maryland, New York, New Jersey, Virginia, West Virginia and Ohio as well as Pennsylvania.