#CondomChallenge Is As Stupid As It Sounds 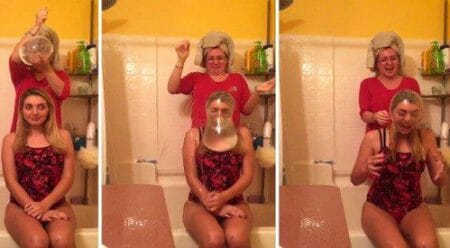 (PCM) Taking influence from the ever popular Ice Bucket Challenge that over took social media, the #CondomChallenge is now beginning to go viral and it could have some very dangerous consequences.

The way it works is an individual takes a condom, fills it with water and then has someone else drop it over his or her head. The idea is that it forms a bubble around the persons face for a few seconds before eventually popping.

The claims, at least according to the Condom Challenge official Twitter page, is that it was created to raise awareness for safe sex. The original video was posted by two guys and received thousands of retweets and spawned hundreds of copycat videos using the hashtag #CondomChallenge.

The danger lies in the fact that this particular challenge could lead to suffocation or even possibly death if for some reason the condom fails to pop. The challenge is supposed to promote safe sex, it truly only shows that a condom can fit over a person’s head and does not at all explain the benefits or proper usage of a condom as a way to promote safe sexual behavior.

It has done nothing more than turn condoms into a game that can lead to some very stupid and dangerous situations. The rules for the challenge state that you should be prepared to pop the condom after a period of seven seconds if it does not pop on it’s own.

This entry was posted in Debatable, Health, Lifestyle, News