What Did Dick Van Dyke Do When He Turned 90? 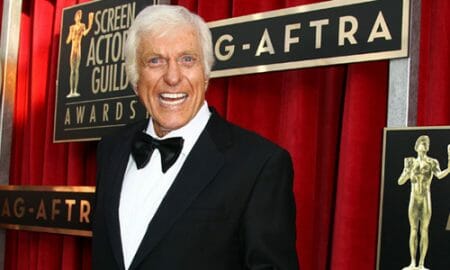 Dick Van Dyke is probably one of Hollywood’s most illustrious personalities.  I won’t use the word famous.  He is not sought out for interviews and neither do you see his name in the rag sheets that you see at the supermarket while in line.  Dick Van Dyke is illustrious for exactly the opposite.  He has led a good quality life while giving us good quality entertainment.

Van Dyke was born December 13, 1925.  It was a Sunday, which is interesting in the fact that he would eventually teach Sunday school and write a book about the experience.  But I think it means more than that.  Dick Van Dyke opted to make movies he could bring his family to see.  So Sunday values were part of his career.

This article is not a short biography.  If you want that you can easily look that up on Wikipedia.  This is meant more as tribute to a man who has affected my life in a very positive way and I believe he still affects me and others to this day.

My first recollection of Dick Van Dyke would have been the film version of Bye Bye Birdie.  Bye Bye Birdie was a musical farce that was based on the real story of Elvis Presley being drafted into the army. Van Dyke had the lead role, which was the song writer for Birdie, he also played the role in the Broadway production.  What I remember most was his singing of a song that has become a standard called “Put On A Happy Face”.  It was duet he sang with Janet Leigh of Psycho fame.  The song had some great special effects in the film, but also was upbeat and yes happy.  It is a song I can still turn to when I feel sad or depressed.

My next recollection only comes in pieces.  Van Dyke played Rob Petrie in a sit com called The Dick Van Dyke Show.  The ongoing story was a comedy about a man who had to balance both work and home.  Van Dyke loved to do physical comedy and was a big fan of Stan Laurel of Laurel and Hardy fame.  You can see much of Laurel in the physical comedy that Van Dyke did in his show.  I was pre-school when this show was on so I did not see much of it then.  But in re-runs I’ve probably seen each episode about 50 times.  The show is timeless and so the comedy holds up today as well as it did when it was first aired in the early 1960s.

Drum roll please!  My biggest early recollection of Dick Van Dyke is probably the same of almost everyone that is reading this story.  Dick Van Dyke left his mark on all of us when he played Burt, the chimney sweep, in Walt Disney’s Mary Poppins.  I would not call many movies perfect.  Mary Poppins is one of the perfect films.  It had it all, music, comedy, drama, and a story with a moral that both adults and children can relate too.  In that film Dick Van Dyke made an impression that is still being felt by both young and old alike.  In fact he also has the lines at the end that makes the point of the entire film.

Next comes Chitty Chitty Bang Bang, the story of the magic flying car that every kid loved to see.  Van Dyke played Characticus Potts a poor inventor who buys a beat up old car and turns it into a magnificent machine that can float fly and guide itself to its destination.  The film had some great songs and was fun to watch.  The story line had the same main emphasis though, the idea of how large a the role of the father plays in the growth of children.

Van Dyke went on to do more comedies for Disney as well as other studios.  I remember them vaguely but not with as much gratitude and joy that I feel as I have with the work mentioned above.

Dick Van Dyke today is still an inspiration to me.  When he was younger he overcame an issue with alcohol which in itself is amazing.  In the last few years he has been in all three of The Night At The Museum movie series with Adam Sandler.

When Mary Poppins, the Broadway stage show made it to Los Angelas he took a small part in the show.  Recently he has worked with some young men who call themselves Dick Van Dyke and the Vantastix.  They record as well as do live performances.  This group also performed live at the San Diego Comic Con this year.  They were on the floor of the convention center, not on a pay to see stage venue.  This year he danced in a music video by Dustbowl Revival in a song called Never Had To Go.  You can catch the video on YouTube.

Dick Van Dyke will have spent his Birthday Party at Disneyland.  At 12:45 his singing group performs.  At around two o’clock a birthday parade, at 4:45 a Let’s Go Fly A Kite sing along, at 8:45 he is honored in the Paint the Night Parade as well as the fireworks display at 9:30.  Mr Van Dyke is not relaxing on his Birthday.

I feel a debt of gratitude and honor toward Mr. Dick Van Dyke.  He makes me happy.  He has put family values first.  He has shown us that old age can be a magnificent time of life, and he has given me and many others a life time of memories.  Happy Birthday Dick May God Bless You.

This entry was posted in Celebrity, Lifestyle