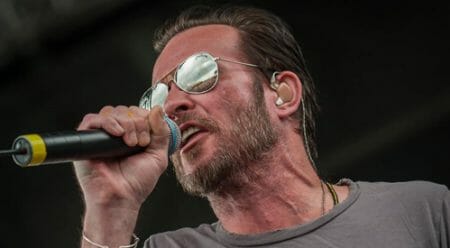 In the letter, Mary urges fans to not to glorify the tragedy of Weiland’s passing, as they have truly lost any amount of hope and she poignantly reveals the terrible truth about the late singers troubles with substance abuse.

She goes on to graciously thank the fans for their condolences and support for her and the children however she says “like so many other children, they lost their father years ago. What they truly lost on December 3 was hope”.

Her letter is both incredibly brutal and honest and reveals the hard truth about the struggles that a family must face with dealing with an individuals substance abuse. She gives a glimpse as to what living with Scott was like on a day to day basis off the stage rather than how he was viewed in the public eye.

She concludes her letter by saying ” Our hope for Scott has died, but there is still hope for others. Let’s choose to make this the first time we don’t glorify this tragedy with talk of rock and roll and the demons that, by the way, don’t have to come with it. Skip the depressing T-shirt with 1967-2015 on it – use the money to take a kid to a ballgame or out for ice cream.”

Back in 2011, Mary penned the critically acclaimed book Fall To Pieces: A Memoir of Drugs, Rock ‘n’ Roll, and Mental Illness. In the book she reveals the extreme highs and lows of her life with refreshing candor and unflinching detail. She beautifully tells the story of her life, including her longtime relationship with ex-husband, Stone Temple Pilots/former Velvet Revolver frontman Scott Weiland.

Mary offers a window into the world of modeling and rock ‘n’ roll, while at the same time providing deep insights into the drug and alcohol addictions that could have killed her, and her serious and misunderstood mental illness.

We spoke to Mary about the release of her book, her life being married to Scott Weiland and of course the battles with both substance abuse and mental illness. You can listen to our full interview by clicking here!

This entry was posted in Celebrity, Debatable, Family, Lifestyle, News