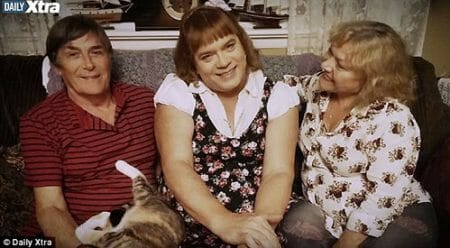 (PCM) 46-year old father of seven Stefonknee (Stephanie) Wolschtt has chosen to abandon his family and is currently living life dressing up and pretending to be a six-year old girl with a new adopted family. Wolschott left her 23-year marriage to fulfill her dream of this new lifestyle, however many, including her ex-wife are criticizing the decision. The Canadian native says “I just don’t want to be an adult right now”.

Wolschott is currently acting in the role of “little sister” to her newly adopted parents’ youngest granddaughter . Wolschott claims that his new family is incredibly supportive and comfortable with her deciding to be a little girl. In fact, they even do “kid stuff” together in what they are calling “play therapy”.

Wolschott was recently interview for “The Transgender Project” and the clip has already racked up over 1 million views on YouTube. The clip stirred up quite a bit of controversy after it was published, so much so that the comments for the video eventually had to be disabled.  You can view the interview below:

This entry was posted in Debatable, Family, Lifestyle, News