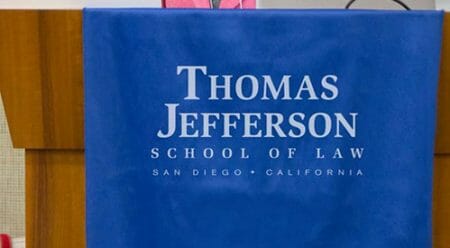 (PCM) Anna Alaburda is in the middle of quite a hefty lawsuit against her former college Thomas Jefferson School of Law in San Diego, California, as she claims it has been eight years since she graduated and she still can’t find a job as an attorney. She is suing the college for fraud and asking that they pay the $150,000 in tuition she owes, as well as, any lost wage she claims she should have accrued over the years.

The case is unprecedented, as there have been no other cases on record where a student has successfully sued a college for failure to find a job. Alaburda claims the school misrepresented the number of its students who found jobs after graduating, and that she wouldn’t have enrolled if she knew it was inflated. The school counters that Alaburda just did not try or work hard enough to find employment post-graduation.

In her defense, Alaburda graduated with honors in 2008 and passed the California bar on her first attempt. She claims to have sent her resume to over 150 various law firms and so far has only had one full time job offer come back which paid far less than a job in another industry.

Do you think that Alaburda has a case? Should you be able to sue your college for failure to find full-time work after graduation? If Alaburda wins this case, it could certainly open the door to similar lawsuits being brought forth with some being legit and others as a way to make a quick buck.