Celebrating the 20th Anniversary of ‘Riverdance’ with Maggie Darlington 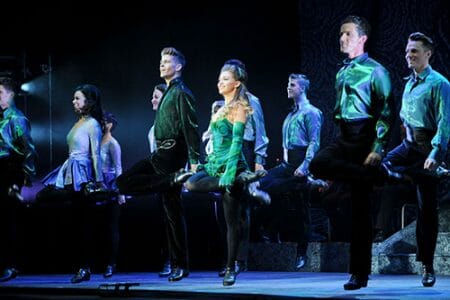 (PCM) When Maggie Darlington was a pre-teen she began dancing with the Claddagh School of Irish Dance in California and went on several years later to win the World Irish Dancing Championships, all the while securing her passion and future. Her love for Irish dancing, music, performing and making her mark in the world have all come together in her on-going gig as a lead dancer in the current 20th Anniversary World Tour of “Riverdance” – also known as an international Irish dance phenomenon.

“Riverdance – The 20th Anniversary World Tour,” now playing through June 19 at the Academy of Music in Philadelphia, was composed by Bill Whelan,produced by Moya Doherty and directed by John McColgan. The riveting show comes directly to North America following a sold out run across Europe and Asia,and this production continues to Virginia and South Carolina.

Drawing on Irish traditions, the combined talents of the performers propel Irish dancing and music into the present day, capturing the imagination of audiences across all ages and cultures in an innovative and exciting blend of dance, music and song. Of all the performances to emerge from Ireland – in rock, music, theatre and film – nothing has carried the energy, the sensuality and the spectacle of “Riverdance.”

Darlington, now 27, a native from Ventura, California, has been with the show a joyous five years, and believes that the show has given her the perfect foundation for her performing career, a chance to tour the world and deepened her love for the arts. 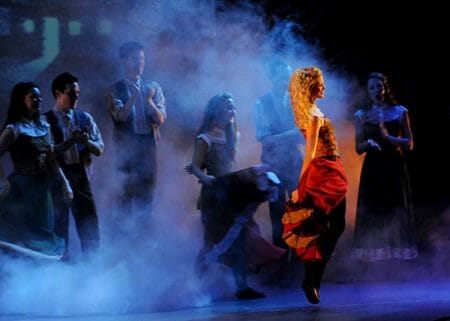 Q: What are you most excited about for the 20th Anniversary of “Riverdance?”

Maggie Darlington: I would say that it’s just exciting that the show has been around for as long as it has, and that it is looking better than ever. We have an extremely talented group of dancers and I am thrilled to be working with all of them.

Q: Talk about your early career?

MD: I began dancing with the Claddagh School of Irish Dance in California.

Q: I hear you won many awards for Irish dancing?

MD: Yes. I won four North American Championships, two All‐Ireland Championships and in 2007, the World Irish Dancing Championships. In 2010, I performed the lead role in Busch Gardens’ production Celtic Fyre and originated the lead female role in “Battle of the Dance.” After that I joined “Riverdance.”

Q: Were you ever stuck by stage fright?

MD: No, not really. I went to my first world competition when I was 11, so by the time I was competing at age 17 and 18 I was already seasoned at that point. I won the World Irish Dancing Championships in Glasgo,Ireland, at age 18.

Q: Have you ever made friends with someone you were competing with in the dance competitions?

MD: Yes. My best friend now in “Riverdance,” Meghan Lucey, was a competitor at the world championships. She’s part of the “Riverdance”troupe and we are close friends. Previously, I knew her name, what dress she wore and how she placed, but now doing the shows has brought us closer. Now,it’s all about getting to a town or city and saying, ‘Let’s get some coffee because I’m a little bored today.’

Q: This is your fifth year with the show, right?

Q: What else can you tell me about the current show?

MD: It’s more than it has ever been – it’s not only Irish dancing: Flamingo, Russian, tappers, and more, but the music is a testament to so much. It was written by the same man, and for each aspect he wrote amazing music for the Spanish dancers, performed by Irish musicians. Overall, I can say that the music is amazing!

Q: Since this is the 20th Anniversary, why do you feel it has endured so long?

MD: I would say it has become a classic because it is cultural and it touches on immigration, which we can all identify with since so many of us and our families came here from somewhere else. This is not just a story or style of musical theater. But it is cultural and true to its roots. I would say that it is somewhat infectious and either you like it or you don’t.Most people really seem to like it.

Q: Tell me about your family back home in California.

MD: I have two older sisters and a twin brother.

Q: Is there anyone in the theater or entertainment world?

MD: Nope. My twin brother is getting his PhD in physics at Berkley – so he obviously gravitated toward the other end of the spectrum.

Q: What do your parents do?

MD: My mom is a paralegal with an English degree and my dad is a CPA. 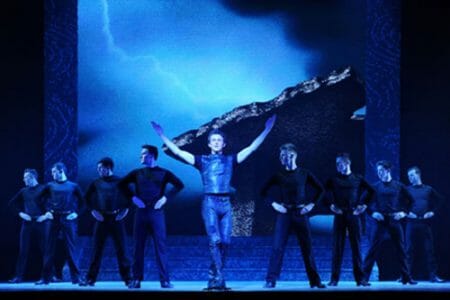 Q: Has your family been supportive of your theater/dancing career?

MD: Definitely. My dad is happier now that I am getting paid to dance then when I was competing, but everyone has been amazing.

Q: You have been traveling on and off for five years. How long is the current tour?

MD: Nine months. Some of them have been shorter, like six weeks.

Q: Did this show go to California so you were able to share it with friends and family?

MD: Yes, we were there in December — L.A., Orange County, and San Luis Obispo — and that made it particularly exciting for me.

Q: Do you get tired of life on the road?

MD: Sure, sometimes. But you have to consider the pros and the cons. We’re lucky that we get to sleep in most of the time because our shows aren’t until the evening.

Q: Were there any surprises during this tour?

MD: Yes. I really liked Boise, Idaho, and I was surprised about that was. It’s just a college town, but we really liked the vibe outside,it was so clean, the air was so fresh and we loved the mountains. We were there during perfect weather and had a great time.

Q: You should write a travel blog in your spare time.

MD: My boyfriend and I have thought about that. Isaac is the head of the sound department and we enjoy exploring new places and finding that perfect coffee shop in each town.

Q: What is your advice to up-and-coming performers who want to make this a career?

MD: I would tell any up and coming performers that you need have tough skin and be ready and willing to work hard — whether it’s applying a note from the director, or you’re in rehearsals trying to learn choreography. It’s no longer just your past time but your job. Yes it’s fun,but it takes focus and seriousness as well.

Q: After “Riverdance” what are your dreams, hopes and aspirations?

MD: I’m still trying to figure that out. I love entertainment; but I also love yoga and anything physical. So,we’ll see.

Q: Lastly, why should someone come to the show for the first or subsequent time?

MD: I would say that it’s energetic and joyous. I love the fact that I always see wide smiles on people’s faces during and after the show. The music is uplifting and people like the rhyme energy and style of the dancing. It’s a good time!

This entry was posted in Advice, Celebrity, Lifestyle, News