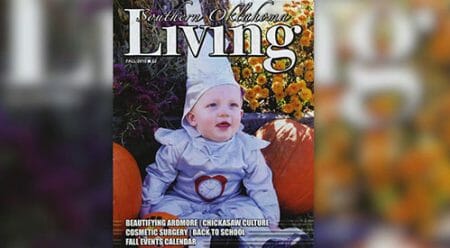 (PCM) The cover image on the fall edition of Southern Oklahoma Living magazine is stirring up a heated controversy. The image in question features a baby dressed up in what is supposed to be a tin man costume based upon “The Wizard Of Oz”, however what it looks like instead is where the debate is catching fire.

Magazine subscribers were shocked when they saw the image, as the hood the baby is wearing features a handle to indicate it is a tin man’s hat, however the handle is partially obscured by  the letter “I” in magazine’s title.  That being the case it actually appears that the baby is sporting a highly offensive baby Klansman outfit supporting the KKK, at least by the way the flap of the hood is hanging down behind the baby’s head.

Many had to do a double-take when they first glanced at the cover. Some felt that it does not completely look like a Klansman outfit, however it certainly does not look like a tin man either. Wouldn’t it have been easier if they just donned the baby in an adorable pumpkin costume and called it a day?

Many are asking that the magazine apologize for publishing the image, as because of the times we live in publishers have to be so careful in regards to what they are printing. These days everything is offensive to everyone, however we can certainly see a bit of the reasoning with this particular cover image.

The magazine’s publisher declined to comment on the issue, however she did publish an article in the Sunday paper which was titled “Friday Was A Sad Day In Ardmore”.  The article said “I don’t have a formal apology but here’s what I will say, if you were offended by the photo I’m sorry you didn’t see what I saw. Or what I’m sure many other people saw — a child dressed as an iconic character from one of the most beloved films of the Twentieth Century.”

She went on to say “Unfortunately, with the current climate in the country, even the most innocuous imagery can be misconstrued into something hateful and destructive.”