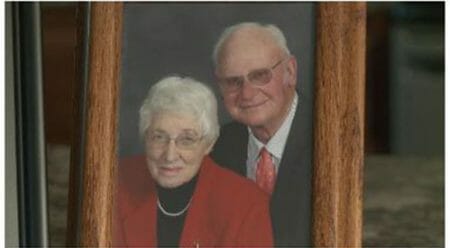 (PCM) Such a heartwarming, yet saddening, end to a beautiful life-long love story! Henry and Jeanette De Lange were married for 63 years and both sadly passed away a mere 20 minutes apart in the same room. 87-year old Jeanette passed away first at 5:10pm after succumbing to her battle with Alzheimer’s and was quickly followed in death by her husband 86-year old Henry who passed away at 5:30pm after his battle with prostate cancer.

After Jeanette passed, one of couples son’s looked over at his father and told him “Mom’s gone to heaven” and he claims that at that point his father knew he didn’t have to fight to stay alive any longer. He says Henry opened his eyes one last time to look at his wife and then he too passed away just 20 minutes behind her.

The family claims they could not have asked for a more beautiful way for their parents to leave this earth and thank God for showing mercy on the couple who couldn’t bear to live without one another. A joint funeral was held for the couple who are hopefully spending a true eternity with one another.