Woman Kicked Out Of Six Flags For An ‘Inappropriate’ Shirt. Male Friend Puts On Same Shirt And Is Let In 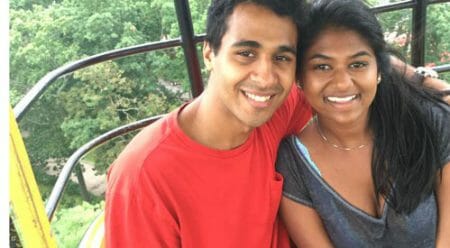 (PCM) A young woman by the name of Bina Ramesh was recently denied entry to the Six Flags amusement park in Jackson, NJ because a male security guard deemed the shirt she was wearing to be “inappropriate”.

You may be think that Ramesh was wearing some sort of see-thru halter top or shirt with an offensive message, but think again! Ramesh was wearing a simple v-neck cut grey t-shirt, similar to the style you would find in any department store. Ramesh was told by the security guard she would have to change her shirt if she wanted to be allowed in the park.

Here’s where the story takes an interesting turn. Ramesh returned to the parking lot and switched shirts with her male friend to prove that there was nothing offensive about the shirt itself. Lo and behold, when the pair went to re-enter the park they were allowed admission without a single issue.

In a Facebook post regarding the incident, Ramesh says “Apparently, when a boy wears the same top, it’s fine, so thank you for swapping shirts with me in the parking lot because we still live in a world of ridiculous double standards and sexism”.

Based upon the pictures that Ramesh posted via social media, we can see nothing offensive about the shirt in question other than it being the tiniest bit see through. Thus far, Six Flagas has had no comment on the situation.