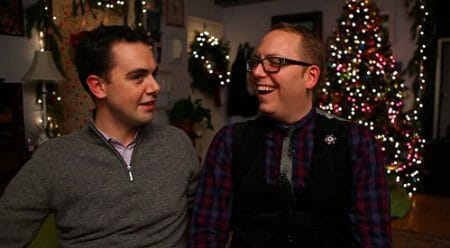 (PCM) What began as an mailing accident six years ago has turned into a yearly tradition for Jim Glaub and his husband Dylan Parker. For some reason the couple mistakenly received hundreds of letters in the mail that were meant to be delivered to Santa Claus, but somehow ended up at their apartment on 22nd Street in New York City. For the past six years the letters have continued to be delivered every November and December and Glaub and Parker make sure that they take the time and effort to respond to each and every one.

The couple told US Weekly that the letters mostly come from low-income children who have simple requests such as food or clothing. Some even just ask for a better place to sleep. It is truly heartbreaking to learn what some of these children are enduring and yet they have still kept the belief in both Christmas and Santa Claus despite their living situations.

The volume of letters coming has reached a overwhelming numbers, so Glaub and Parker have reached out via Facebook and asked for volunteers around the world to help out with reading and responding to the letters. People can even send gifts if they wish. The Facebook group is called “Miracle on 22nd Street” and boasts well over 4,000 members. Glaub and Parker have since moved overseas to London, however they still plan to keep their 22nd Street address and will continue to answer the letters and keep the Christmas spirit alive for these children.

Parker said “It requires that we put ourselves second momentarily to help someone unknown to us and without the usual gratification of seeing the outcome or receiving thanks. The act of giving has to be enough.”