Man Provides Himself With Possibly The Shortest Obituary Of All Time! 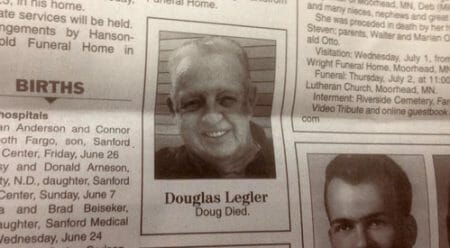 (PCM) Douglas Allen Legler of Fargo, North Dakota passed away at the age of 85 and has possibly written himself the shortest obituary of all time. Seriously, the spelling of his name is longer than the obituary itself.

While Legler’s family can share a ton of stories in regards to his time working as a truck driver and a vending machine repair man, as well as a sometimes singer, none of those details appear in Legler’s obituary.

He told his family that he wanted to keep it simple, so Legler’s obituary reads “Doug Died”. That’s it, no more or no less. Legler wanted to be remembered for his sense of humor and his family was more than happy to honor his wishes.

Legler’s simple obituary has since gone viral and has been shared across the net. Many feel that they wish they could have known Legler better and his family says he never realized just how many people loved and cared for him.

Legler’s obituary will now live on in infamy, as one of the more unique and certainly straight to the point.