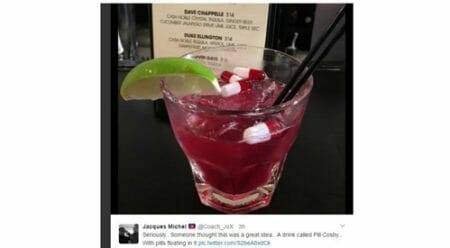 (PCM) A Washington, D.C. bar called Diet Starts Monday is facing a lot of internet backlash after someone came up with the brilliant idea to create an alcoholic drink called the “Pill Cosby” and it pretty much managed to offend just about everyone!

The “Pill Cosby” was a tequila-based drink that was … get this … actually garnished with fake floating pill capsules! Seriously! We have no clue who thought this was a good idea. Did they not recall that actor Bill Cosby faced accusations of sexually assaulting and drugging at least sixty women?  That is definitely not a situation to make light of, even if they were just trying to be tongue-in-cheek.

One of the bar’s co-founders attempted to diffuse the situation by saying that the drink was meant to be a statement on rape culture and told the Washingtonian that “it lets people be a little more aware”, but no one is buying that and folks on both social media and Yelp continue to be outraged.

The offending “Pill Cosby” drink has since been pulled from the bar’s menu and they have issued an apology to any patrons who may have been offended posting the following tweet: