Texas Teacher In Hot Water After Giving Out Offensive Award 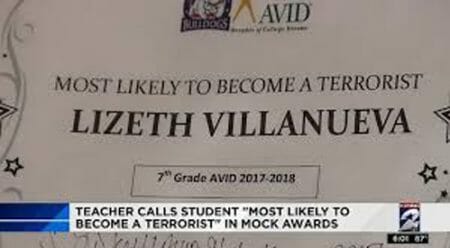 (PCM) A Texas middle-school teacher may be in danger of losing their job after giving out a mock-award which read, “Most Likely To Become A Terrorist”, to a 13-year old student during end of the year superlatives .

To make matters worse, the mock award was given to the student, Lizeth Villanueva, just one day after the tragic terrorist bombing in Manchester that killed 22 people. Anthony Aguirre Junior High has now come under fire and the student’s mother is demanding answers.

The teacher claims that the offensive award was meant to be taken as a joke, but Villanueva and her mother find it to be no laughing matter! They are demanding some sort of justice and that the teacher in questions be somehow reprimanded for their actions.

Villanueva no longer feels comfortable being in the same classroom as the teacher and has not returned back to the school since the incident occurred. The school’s principal Eric Lathan issued the following statement in regards to the mock awards:

The school claims that they plan to launch a further investigation into the incident and no word yet on if any disciplinary actions will occur.