Green Gummy Bears Are Not The Flavor You Would Expect! 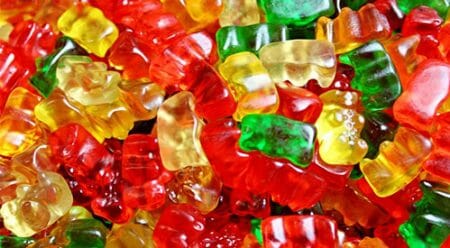 (PCM) In the year of 1967, Haribo introduced their Gold Gummy Bears, which were available in five colors each corresponding to a different flavor. However, it may be a bit surprising for you to learn that the green and red colored gummy bears do not exactly correspond to the flavor you might think!

The flavors include strawberry (green color), pineapple (white color), raspberry (red color), lemon (yellow color), and of course, maybe the only one that makes sense is the orange which is orange in color! Seriously, who ever decided the strawberry flavored gummy bears should be green in color?  We can see that raspberry would be red, but couldn’t the other one have maybe been pink? Is it just us or did you always just assume that the green gummy bears were lime flavored? It’s not like any of the them have a very distinct taste anyway!

Gummy bears got their start in Germany when Hans Riegel, Sr., a confectioner from Bonn, started the Haribo company in 1920. In 1922, inspired by the trained bears seen at street festivities and markets in Europe through to the 19th century, he invented the Dancing Bear, a small, affordable, fruit-flavored gum candy treat for children and adults alike, which was much larger in form than its later successor, the Gold-Bear.

Since the introduction of the Haribo Gold Gummy Bears there have been many copycats and gummys invented to look like other animals and objects as well. Some of the more popular types are gummy worms, gummy soda bottles, gummy sharks, gummy cherries and the list goes on and on. Another gummy manufacturing company called Trolli are probably the closest to Haribo’s Gold Gummy bears in overall appearance, however Trolli’s red bear is strawberry-flavored, while the green is lime and the colorless is grape.

The traditional gummy bear is made from a mixture of sugar, glucose syrup, starch, flavoring, food coloring, citric acid, and gelatin. Production uses a specialized machine called a starch mogul. The image of the gummy bear is stamped into a tray filled with powdered starch. The hot, liquid mixture is poured into the indentations in the starch and allowed to cool overnight. Once the mixture has set, the candies can be removed from the mold and packaged. The molds are open on top, so only the bear’s front is formed while the back remains flat. The original design for each type of candy is carved into plaster by an artist, then duplicated by a machine and used to create the starch molds for the production line.

According to the Haribo website, here is a timeline of gummy bear history:

1967 – The Goldbears get their birth certificate:
The roaring success of the new product leads Haribo to obtain an official “birth certificate” for their Goldbears. In this year the German Patent Office records “Gold-Baren” as a registered trademark. It is the first time that the Goldbears would be offered in a variety of colors and flavors.

1968 – The Goldbears change shape:
At the end of the sixties, the Goldbears packaging gets a face-lift and updates to a modern cellophane bag bearing the Haribo logo.

1978 – The Goldbears change shape:
In the seventies the aesthetics of everyday life change for Haribo customers and so the Golbears shape adapts to the times too. Their original, relatively round shape with splayed feet change to the more compact and stylized shape we know today. The bag also takes on a new look: the teddy bear design now appears in technicolor.

1989 – The Goldbears change color:
Now the Goldbear’s colors go natural and are somewhat paler since they are obtained from natural fruit and plant concentrates, however this doesn’t damage their popularity one bit. The yellow Goldbears with the red bow tie appears on the packaging for the first time at this stage.

Gummy bears themselves are so popular that the Walt Disney company even created an animated television series called “Disney’s Adventures of the Gummi Bears” which ran from 1985 through 1991. The series was very loosely inspired by the gummy bears candy, as the idea came to Disney CEO Michael Eisner when his son requested some gummy bear candy from him one day. Gummy Bears have certainly made the mark in pop culture history and will most likely continue to do so for a very long time!

This entry was posted in Debatable, Fixed It For You, Food & Recipes, I Love Food!, Lifestyle, News