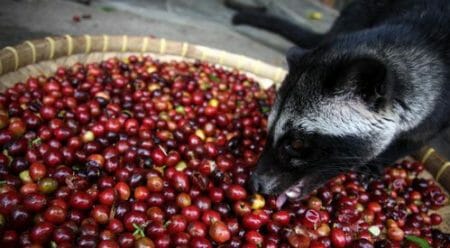 (PCM) If you are anything like us than you probably cannot get through a day without at least one or two cups of streaming hot coffee. We like it all different ways … hot, cold, frozen … doesn’t matter as along as we are consuming some caffeinated deliciousness, but as must as we love coffee, even we have to question whether or not we would dare to try a cup of the world’s most expensive brew, especially after discovering exactly how it is created.

Many coffee drinkers enjoy trying new brews and learning about the creation process comparing many different varieties all over the world. One of the most highly coveted and most expensive coffees in the world is called kopi luwak, or otherwise known as civet coffee. But once you find out how its’ made you may want to rethink giving it a try or at least hope they have a good sanitation process put in place.

The Asian palm civet is a small rodent like creature that eats berries, insects and reptiles and used to be looked as a pest to farmers because they would come in and destroy a farm’s berry crops, especially coffee berries, which appear to be the berry of choice for the civets. When the civets consume many coffee berries at once the seeds are contained with the animals feces.

Coffee makers would then collect the berries contained within the civet feces and use them to create the coffee out of the partially digested beans,creating the highly coveted civet coffee. Just thinking about drinking down processed civet poop is enough to turn our stomach, but many people swear by the coffee’s taste. This is one we might have to pass on, despite our java affinity.

Another reason we may have to pass would be the price. Just one small cup of civet coffee can sell for upwards of $80 here in the U.S., putting our normal $1.50 cup of the cheap stuff to shame. Would you try civet coffee if given the chance? We are not that brave!