The Delicious History Of Nachos 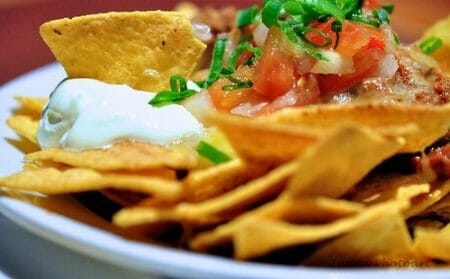 (PCM) Who doesn’t love a large plate of nachos covered with melting cheese, lettuce, tomatoes, and sour cream? Nachos have become one of our go to snack foods and it an incredibly popular appetizer at many restaurants and sports bars. They are one of the number one picks for a stadium snack, especially during sporting events.

Just what is it about nachos that make them just so darn irresistible?

Nachos were first invented by a legendary man named Ignacio Anaya when he made a batch for a group of hungry military wives in a restaurant called the Victory Club in Piedras Negras, Mexico, near Fort Duncan in 1943.

Anaya’s nachos consisted of fried tortilla chips, topped with shredded cheddar cheese and sliced jalapeno peppers. He called them “Nachos” because that was Anaya’s nickname and it has stuck ever since.

According to Wikipedia, “the first known appearance of the word “nachos” in English dates to 1950, from the book “A Taste of Texas”. According to El Cholo restaurant history, waitress Carmen Rocha is credited with making nachos in San Antonio, Texas, before introducing the dish to Los Angeles at El Cholo Mexican restaurant in 1959. There popularity is said to have spread from that time.

When Anaya passed away in 1975, a bronze plaque was put in place in Piedras Negras and October 21 was declared the International Day of the Nacho.

As we previously mentioned, nachos have always been a favorite stadium treat during both sporting events and concerts. It was in 1978, however, that stadium nachos truly went mainstream. During a Monday Night Football game that year, announcer Howard Cosell commented on the delicious treat he was consuming, which was of course, nachos and they have grown in popularity ever since.

While many people view nachos as a snack food item there are definitely more elaborate versions of nachos which can be created and are often times served as a main course. It all depends on the ingredients, as many people add chicken, steak or beef to their nacho recipes. It is all a matter of preference and there is really no wrong way to create a perfect batch.

In the United States Nacho Day is celebrated annually on November 6 and as a fun fact on April 21, 2012, the world’s biggest serving of nachos was made by Centerplate at University of Kansas in Lawrence, Kansas, United States. It weighed 4,689 lb and contained 765 pounds of nacho chips, 405 pounds of salsa, 323 pounds of tomato, 918 pounds of meat and beans, and more than 2,200 pounds of cheese.

We don’t know anyone who would take on that amount of nachos, but gosh, wouldn’t it be fun to try!

Below you can find a great recipe for nachos to enjoy on game day or anytime!

Cook and stir ground beef in a skillet over medium heat until meat is crumbly and no longer pink, 5 to 10 minutes. Drain excess grease. Stir in taco seasoning mix and water and simmer until beef mixture has thickened, 8 to 10 minutes.

Set the oven rack about 6 inches from the heat source and preheat the broiler. Line a baking sheet with aluminum foil.

Broil in the preheated oven until cheese is melted, watching carefully to prevent burning, 3 to 5 minutes.

This entry was posted in Fixed It For You, Food & Recipes, I Love Food!, Lifestyle, News