The Birth Of The TV Dinner Was Actually A Mistake! 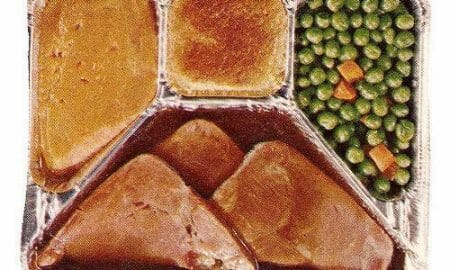 (PCM) Surely nearly every one of us at one point or another hasn’t had the time or the energy to make a home-cooked dinner each and every night, so that is when the modern day TV Dinner comes in handy to save the day. We are sure you definitely have a few of these lurking throughout your freezer, just waiting to be consumed on a lazy night or for a quick and easy microwaveable meal.

Did you know that the TV Dinner as we know it today, actually began as an accident back in 1953 when the Swanson company ended up to 260 tons of left over Thanksgiving dinner and they didn’t know how to get rid of it! We also have to mention that Swanson company saleman Gerry Thomas also had a lot to do with the birth of the tv dinner, as he was inspired after a visit to Pan American Airways in Pittsburgh!

We featured Clarence Birdseye as another one of the inventors of frozen foods back in 1923, when he invented the technique for flash-freezing fresh food back in 1923, however he did not invent the modern tv dinner plate as we know it today. When Thomas was traveling through Pittsburgh that frozen dinners were being sold on aluminum trays, he brought this concept back to Swanson in Nebraska, who then launched a massive advertising campaign and the tv dinner became a household name.

The Swanson company packaged up all that left over turkey, corn bread stuffing, peas and sweet potatoes and placed their advertising campaign on the newest craze that was hitting the nation and that was television. That year alone, Swanson sold more than 25 million TV dinners to hungry Americans, at 98 cents per package. TV dinners were definitely a home-run for the company!

Over the years, frozen meals have continued to develop to meet the desires of the American public. More food choices were added, as well as desserts.  In the 1960s, Swanson expanded its line of meals to breakfast and lunch. In 1973, TV dinners got a major upsize when the Campbell Soup Company (Swanson’s parent company) introduced Hungry-Man, extra-large frozen meals targeted toward hungry men (and women, too).

In this day and age if you glance around the frozen dinner section of your local grocery store you are sure to see far a wide variety of food choices for nearly every palate. They have certainly come a long way from just your basic Thanksgiving leftovers. Research conducted by the Nutrition Business Journal shows sales of natural and organic frozen dinners and other frozen convenience foods have seen steady growth (between 10 to 14 percent a year) since 1997; in 2001, consumers spent $380 million on them!

The average American consumers over 72 frozen meals per year making the frozen food a nearly $22 billion dollar industry. Not bad for a simple mistake!

This entry was posted in Fixed It For You, Food & Recipes, I Love Food!, Lifestyle, News, Thanksgiving