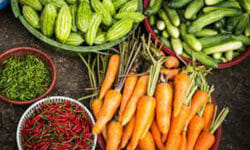 (PCM) Growing up we are nearly certain that at one time or another you have probably come across quite a few interesting food myths over the years. Many of which hold a bit of truth, while others are simply off the wall. We are here to help set the record straight about some of the most common food myths once and for all!

Did you ever hear the myth that eating a bunch of carrots is supposed to help you see better in the dark? Well, as it turns out this myth was simply propaganda by the Royal Air Force to explain why their pilots had improved success during nighttime air battles, but they were actually disguising advances in radar technology.  To this day many people still believe that eating carrots will improve their vision.

Another myth is that consuming Vitamin C can help you prevent catching a common cold. Over the years, research has shown that vitamin C does not ward off colds, except among marathoners, skiers, and soldiers on sub-Arctic exercises.  Not to say Vitamin C isn’t healthy and it is certainly a boost to your immune system, but it will definitely not stop you from getting a dreaded head cold.

Another veggie myth involves celery with many believing that while eating celery you burn more calories than you take in! While celery is a wonderful snack choice for losing weight, they do not have negative calories, however, the calorie count is less than 10!

Many people feel that they should remove the skin from chicken prior to cooking to cut down on fat and calories. While the skin should be removed before eating, it does not have to be removed before cooking, as it helps seal in the chicken’s natural juices.

Many of us love eggs but are warned not to eat them because of high cholesterol. The latest research shows that they don’t actually contribute to high cholesterol. In fact, eggs are an inexpensive source of many nutrients, including zinc and iron, antioxidants lutein and zeaxanthin, vitamin D, and the brain-boosting chemical choline. Keep cholesterol in check by monitoring saturated fat in your diet.

Myths tell us that we shouldn’t eat a lot of carbs in our diet to remain healthy, however, it is all in which carbs you choose to eat. Choosing the healthiest carbohydrates, especially whole grains, is more important to your well-being. At least seven major studies show that women and men who eat whole grains have 20 to 30 percent less heart disease. Separately, in a 2010 study of more than 13,000 adults, those who ate the most servings of whole grains had lower body weight.

So do you really think margarine is healthier than butter? Guess again! Butter and margarine have about the same amount of calories. But while margarine, made from vegetable oils, was created as a more healthful alternative to butter (which contains cholesterol and saturated fat), some kinds of margarine are actually unhealthier because they contain trans fats, which have even more adverse effects on cholesterol and heart health.

Could drinking coffee really stunt your growth?  Most research finds no correlation between caffeine consumption and bone growth in kids. In adults, researchers have seen that increased caffeine consumption can slightly limit calcium absorption, but the impact is so small that a tablespoon of milk will more than adequately offset the effects of a cup of coffee.

Does an apple a day really keep the doctor away? Apples are packed with vitamin C and fiber, both of which are important to long-term health. And if certain viruses or bacteria get into your system, an apple will, unfortunately, do nothing to protect you.

Teens especially are afraid of the myth which claims that eating chocolate will give you acne. In reality, there is no correlation between the two! The research was done giving two groups regular and fake chocolate bars and neither group had any more acne breakouts than the other. So, go ahead and indulge in that chocolate treat!