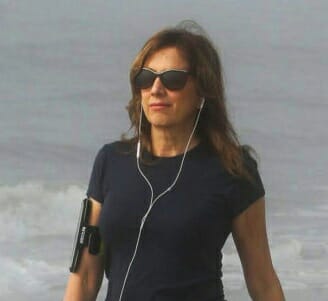 Diana Liberto, a true visionary, has turned her family difficulties into an opportunity to transform the health and wellness of others around the nation.

An attorney and honors graduate of the Rutgers University School of Law, who clerked for a U.S. District Court Judge and joined the office of the General Counsel of Wal-Mart Stores, Inc., serving in various capacities from 2004 until October 2015, including an interim assignment in Wal-Mart India.

After leaving Wal-Mart, she started WalkMyMind, Inc, a corporate and personal wellness company located in Philadelphia where she serves as CEO and chairman of the board.

She also serves on the board of directors of Cohen & Co., Inc. where she is Chair of the Nominating and Corporate Governance Committee and a member of both the Audit and Compensation Committees. She is also on the Advisory Board of J3Personica, a medical education selection and assessment startup.

The world moves forward when a leader has a thought and turns it into a gift to help others,” said Tom Dutta, CEO of AT & T Canada, author and TV host. “Diana is a heroine, an amazing woman whose story and vision of WalkMyMind is inspiring people to grow and prosper in health and happiness. I am one of those people, and honored to know Diana.”

Please tell me about creating WalkMyMind.

I’ve been an attorney since 1991 and never focused on having my own business. I was working as in-house counsel for Wal-Mart in 2014. Unfortunately, I was faced with several terrible tragedies in my family, one after another, and as a result, I suffered from depression and PTSD.

How were you spending your time back then?

Well, for about a year, I was just really blown away. I was so depressed that all I did was work, take care of my mom who was terminally ill, and sit on the couch.  I knew I had to do something so I hired a personal trainer to literally knock on my door, grab me and force me to go for a walk.  Just one walk on the Jersey shore. I found someone, paid her $75 and it felt so good. I started to think about all of the other people who, for whatever reason,  are just not getting off the couch and what could be done to motivate them to get outside and try it. Walking is simple, amazing and life-changing in terms of obesity, diabetes, depression, etc. — it’s a cure all.

This struck an idea that changed your life and the lives of others.

Yes. I got this “boom” in my head, like a bolt of lightning. I thought, ‘If you appeal to people’s interests they will probably take the walk.’ So when you pitch it, it’s not just exercise, it’s interesting!  For instance, if someone is into wine and Robert Parker, the wine guru, asked everyone to meet him at Lucy the Elephant to walk with him and hear about wine, they would probably do it.  That’s what started the idea in my head. I walked straight to my mother’s house, she was sitting drinking coffee with my aunt, and I started talking to them about my idea and I couldn’t stop talking about it. I was taking notes non-stop, all through the day and night, and the whole thing just took me over and turned itself into what it is. It’s unbelievable! 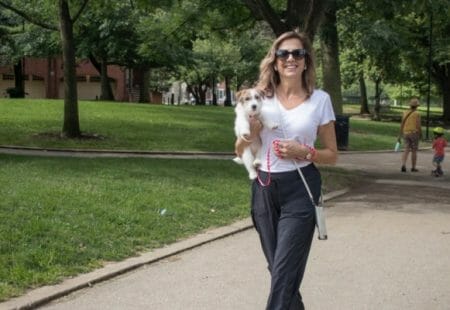 I developed an app that is initially being sold to corporations as a wellness benefit. We also want to move into hospitals, bariatric surgery centers, cancer clinics, orthopedic practices – places where patients need to walk as part of their rehab. So, essentially the app is a wellness tool where the user listens to podcasts of a general nature while walking.  What distinguishes my app is that the company can also add audio content to the app to deliver talks they think are relevant to their community, for instance, talks on nutrition, weight loss, leadership, compliance, on-boarding and other areas of interest. It’s a blank slate for the organization and WalkMyMind assists with the curation and development. The best thing is that employees are not sitting in front of a computer screen, they are out walking!

Why is this so important?

Most employers want their employees to be healthy, but the information that they feed them is in front of a computer. So I am trying to change the way the companies communicate with employees.  As an example, when I started at Walmart, we were given a copy of  Sam Walton’s Made in America.   Wouldn’t it be super cool if it was provided as an audio book instead and employees could walk and listen and actually challenge and compete as to who would be the first to walk the book?

Please tell me the history of your success story.

My first walk took place in 2015, a year after the tragedies, and as I said above.  I’ve been working on it ever since.

When did you go live with the app?

I developed the app in 2017 and in April 2018 WalkMyMind partnered with Global Fit, a 25-year-old Philadelphia wellness company, after which we rolled out to several corporate clients.

Tell me about your early vision versus what the app is today?

It’s not what I initially envisioned, which is often the way these stories go. I envisioned walking with actual people, and I still have that in my head. I want to take a live meeting, where you don’t have to sit down — I’m walking right now while I am talking to you, and I am often walking while I am on the phone connecting for business and pleasure. I believe that CEO’S and managers should promote walking meetings whenever possible.  My down the road vision is that Stephen King will walk a book signing, really, why do he have to sit?

Why do you feel that first walk set things in motion to change your life?

First of all, it wasn’t inspiration; it was desperation. I was in such a bad mental place and knew that I couldn’t go on like that. I also knew I had to literally move myself, both physical and mentally, to make changes. Depression and loss can make us deeply despondent.  Most of us will experience it at some point in our lives.

Why is walking the key?

There is something about being outside and moving that can change everything. If you have friends to walk with or you listen to an audio book or podcast it can change your outlook. There are times when being alone with your own head is just not good.  There are other times when walking alone and listening to nature can be wonderfully restorative.  Just getting outside and moving provides so many mind and body benefits and it doesn’t require anything but a pair of sneakers. You don’t have to buy anything or join a gym – you don’t have to do anything special. I think one of the best things we can do for others who may be struggling is to go for a walk together. Knock on their door and walk down to the end of the block and back.  You will be helping yourself and someone else at the same time.  Win, win.

The future is extremely exciting.  We have an amazing pipeline of clients who are requesting demos and beta tests in addition to the companies that have already purchased the program.  We plan to enhance the app using feedback from customers to make it even more fun, functional and fabulous for users to walk their minds.

What does your story tell others about finding a passion and changing the world for themselves and others?

For me, it didn’t begin as a passion. It was more like an “aha moment” that I believed then, and still believe now, was and is bigger than me.  This is what propelled me forward, even when I had doubts and wanted to throw the whole thing up in the air. There are entrepreneurs who hit on an idea and/or follow a passion and it’s all smooth sailing.  I sure wish I was one of them.  I represent the other group — struggling entrepreneurs — who have had to push the proverbial boulder up the hill.

What is the overall message of your success that you want to share?

I believe the overall message of my “success” throughout my life has been tenacity.  Having the relentless strength to pursue a goal, a purpose, through to the end.  Don’t listen to the naysayers.  Stay laser-focused and get it done! 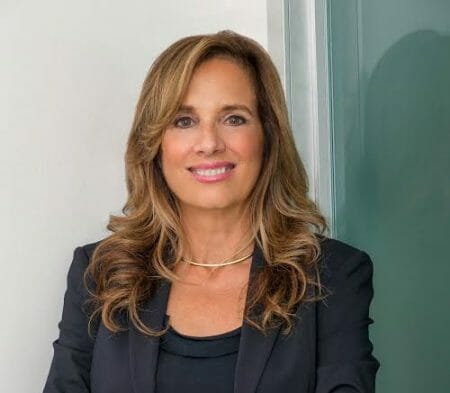