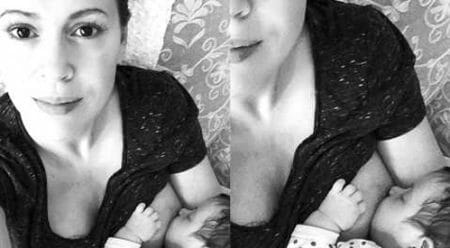 (PCM) Actress Alyssa Milano is not very happy with London’s Heathrow airport after 10 ounces of her breast milk was confiscated by airport security. She expressed her displeasure with the situation via Twitter saying “@HeathrowAirport just took my pumped breast milk away. 10 ounces. Gone. Not okay!”

(1 of 2) @HeathrowAirport just took my pumped breast milk away. 10 ounces. Gone. Not okay.

To make matters worse it appears that the airport did more than just confiscate the breast milk, they threw it away. Any breast-feeding mother can certainly sympathize with Milano’s plight and many have joined in Milano’s feud on Twitter as well, even coining the hash tag #DontTossLiquidGold.

Milano wanted to know why her shampoo was okay to pass through security but breast milk was not saying that if she had known that it was going to be a problem she would have split the milk into two separate containers.

Heathrow was very quick to respond to Milano’s tweet saying “Hi Alyssa. Unfortunately, without a baby present, the government requires all liquid carry-ons to follow the 100ml rule.”

It seems that Milano may have actually had the baby with her because she then responded with “I was told I would be fine if the baby was with me. Plus, it was less than 5 ounces per container. Why is my shampoo okay?”

Heathrow then responded again saying “Sorry for the confusion caused. To confirm, if you aren’t traveling with your baby, milk is subject to 100ml/(3.4oz) 1/2.”

This entry was posted in Baby, Celebrity, Debatable, Lifestyle, News