AMC Theater Chain Considers To Allow Texting During A Movie 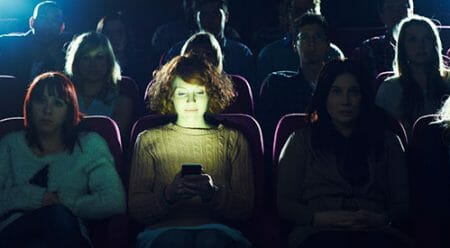 (PCM) We are already chained to our electronic handcuffs a.k.a. cellphones enough throughout the day, so one would think that being able to enjoy heading out to catch a flick and disengaging from technology for a little bit would not be such a bad thing, well, think again!

AMC Theaters CEO Adam Aron recently told Variety magazine that the company was seriously considering to allow texting in their theaters during a movie. They feel that the amount of millennials shelling out cash and attending a movie showing has been on a steady decline over the past few years and hope that by allowing this generation, as well as, others keep their phones on during the film would somehow make the overall experience more appealing.

Forget the fact that the light and buzz from cellphones constantly going off is a distraction to those of us who would actually like to enjoy a movie and unplug for a bit! Needless to say, the suggestion is getting quite a lot of backlash from movie goers, many who share in our opinion and would rather attend the movies distraction-free!

Aron told Variety, “When you tell a 22-year-old to turn off the phone, don’t ruin the movie, they hear please cut off your left arm above the elbow. You can’t tell a 22-year-old to turn off their cellphone. That’s not how they live their life. At the same time, though, we’re going to have to figure out a way to do it that doesn’t disturb today’s audiences. There’s a reason there are ads up there saying turn off your phone, because today’s moviegoer doesn’t want somebody sitting next to them texting or having their phone on.”

What’s next? Special text-friendly theaters?  Perhaps, as the idea was for AMC theaters to have special auditoriums set aside for those that would like to keep texting! Unreal! Aron later took to Twitter to clarify some of his comments saying that it was only a consideration on very few screens as the company realizes that majority of their customers would rather not text during a movie and would only pursue the option if all of their guests were fully supportive.

Yeah, that will never happen … back to the drawing board guys!