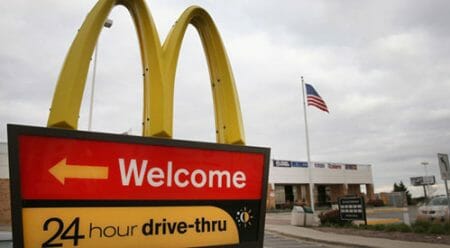 (PCM) A blind man from Louisiana named Scott Magee is suing McDonald’s for discrimination claiming that by switching over to a drive-thru only service at night they discriminating against their blind/disabled patrons. It seems that Magee attempted to access a McDonald’s drive-thru on foot in August of 2015 and claims he was rudely turned away. Magee says the employees refused to serve him, laughed and proceeded to tell him to “go away”.

Magee was angered and claims that McDonald’s is in direct violation of the Americans with Disabilities Act as he claims that visually impaired individuals or those with other disabilities can only use the drive-thru if they pay for a cab or have a companion with them to drive. Most McDonald’s locations change to a drive-thru only service at night citing safety as their number one concern for both customers and staff and it also significantly cuts down on labor costs.

McDonald’s has yet to publicly comment on the pending lawsuit and Magee is hoping to bring about even more action against McDonald’s by branching out even further and making his lawsuit class-action so that additional blind patrons can join in the fight.