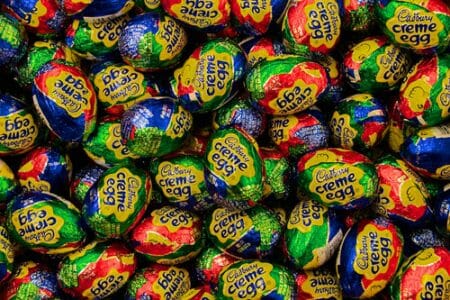 (PCM) We were seriously hoping that this is not true, however it seems that the owners of Cadbury, makers of the delicious Easter candy treat Cadbury Creme Eggs, have secretly changed the recipe and consumers are furious.

According to sources at Kraft Foods, the Cadbury Creme Egg’s Dairy Milk Shell has now been replaced by one made from a standard cocoa mix chocolate.  A spokesperson for the company went on to say “It is no longer Dairy Milk. It is similar, but not exactly Dairy Milk. ”

The spokesperson went on to say that the new recipe was tested on consumers and they found it was the best one to use on the Creme Egg. The company claims that they never tried to market the Creme Egg as specifically the Dairy Creme Egg.

We are not really sure who exactly they tested the new recipe upon, but from the sound of feedback online many fans of the Creme Egg are none to pleased about the new taste. Many are claiming that the chocolate tastes cheap and are incredibly disappointed that one of their favorite treats, which was first introduced 43 years ago, has been changed.

We sometimes feel that they need to leave well-enough alone! Also, in a move to cut even more corners it seems, Cabury has also changed their packaging for buyers who purchase in bulk. Instead of a three or six pack, the Creme Eggs will now come in packs of five or twelve.