The Comeback And History Of Christmas Kissing Balls 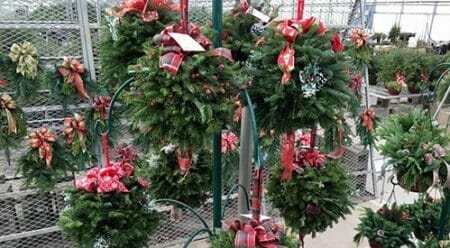 (PCM) Not to be confused with hanging a mistletoe, Christmas Kissing Balls are medium to large size bunches of evergreens, holly and herbs placed in a spherical shape and hung in the doorways of a home. Some people may add pieces of mistletoe to them as well, as a more recognizable symbol to urge those that pass under to sneak in a kiss.

The history of Christmas Kissing Balls dates back to the time of the Middle Ages where people in villages would wind together twine and evergreen branches in the shape of a ball. They would then place a clay figure of the baby Jesus in the center and they were then known as holy boughs. The villagers would then hang their creations in castle passageways and the doorways of larger homes as a way to ensure blessings and good fortune to whomever passed underneath the holy bough and baby Jesus figure.

During the rule of the Puritans in the 17th through the 19th century any type of holiday decorations were severely frowned upon so that was the end of the holy boughs for quite a bit of time. They ended up making a comeback during the rule of Queen Victoria and during the Victoria era the holy boughs or what is know better known as the Christmas Kissing Ball made a comeback in a much different form.  People would take a potato or apple and tie a pretty ribbon around it as a hanger. Then they would stick sprigs of evergreen, holly and sweet herbs into the potato or apple. The result was a new decoration that was both beautiful to look at and smelled delicious as well.

Various herbs and plants spoke a unique and private symbolic language to Victorians and the various ones chosen for the Christmas Kissing Ball decorations could symbolize anything from love, affection, charity and more. It was by the end of the 19th century that the common Christmas Kissing Ball was born and it now symbolized romantic love during the holiday season. The decorations would be found by the dozens adorning ballrooms and homes. The tradition of adding the mistletoe began when a special Kissing Ball was hung in the center of the room and all unmarried maidens would line-up underneath for a chance to be kissed by an unmarried man.

Slowly, Christmas Kissing Balls fell out of fashion by the 20th century and were replaced by just a single sprig of mistletoe hung over or around doorways, however these gorgeous decorations are beginning to make a comeback in a big way. High-end garden centers and greenhouses are beginning to stock traditional Christmas Kissing Balls once again.  You can even find reusable plastic ones at retailers such as Walmart, Kmart and more. Many people have even gotten crafty and begun making their own. Please see below for some easy step-by-step directions for making a very special Christmas Kissing Ball that we are sure you will treasure for years to come.