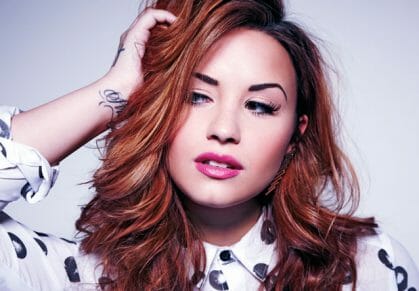 It’s no secret that Demi Lovato has been through a lot in her young years, having found fame at just 7 years old. By 15 she was a pop star who seemed to have it all, but behind the scenes she was falling apart, suffering from an eating disorder, drug abuse, depression, and self-harm.

But that all changed in 2010 when Demi was admitted to rehab for three months. Though she still struggles with some insecurities, the young star has come a long way, and says she’s ready to return to the limelight! The Disney star only opens up about her drug addiction, insecurities and views on body image in a revealing interview with Fabulous Magazine.

On accepting her flaws and learning to love herself:

“I’m not saying I’m perfect, or fixed, but I am learning to love and accept myself. My outlook is more positive and I am happy.”

How Hollywood made it easier to get access to illegal substances.:

“Promoters gave me drugs and alcohol in restaurants or clubs. They wanted me to come back so I would be seen there. They were basically kissing my ass,” she says, a flash of anger briefly interrupting her sunny demeanour.

“I thought they were my friends. I thought I was having fun. Being a celebrity can be dangerous. Nobody says ‘no’. That’s why so many end up overdosing and dying. It could definitely have happened to me.”

On being bullied and dealing with body issues:

“[Bullies] called me a whore and told me I was fat and ugly. I shouldn’t have listened, but I took it to heart and it hurt. I thought maybe I didn’t have friends because I was too fat. I’d make myself sick up to six times a day. My mom was worried, but because I was going through puberty I was having growth spurts so she assumed that was why I was thinner.”

On accepting her new body and being healthy:

“After so long being thin, it was terrifying being heavier. But I am a naturally curvy Hispanic girl. I don’t deprive myself – I had a Kit Kat last night, but I don’t eat s*** every day. I have a meal service that brings my food to my home so I don’t have to think about being healthy.”

On people that try to bring her down:

“I don’t think or care about them. I wouldn’t change what I went through. I’ve learned from it and it’s made me stronger.”

This entry was posted in Beauty, Celebrity, Health & Fitness