Hanukah is Celebrated in December

Don’t like the way we spell it? Try one of these on for size:
Chanuka, Chanukkah, Channukah, Hanukah, Hannukkah, Hanuka, Hanukka, Hanaka, Haneka, Hanika, Khanukkah. 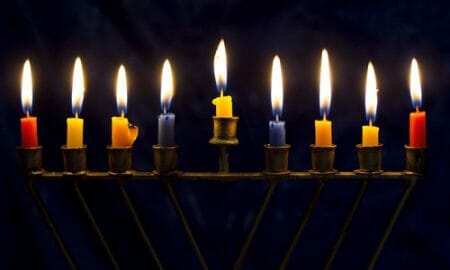 Chanukah, as we all know from Adam Sandler’s infamous holiday songs, is “the festival of lights”. Despite what you may think, it is not a very religious holiday. Rather, is it a celebration of the victory of the Maccabees and the rededication of the Jerusalem Temple. It also commemorates the miracle of oil that burned for eight days.

Chanukah begins on the 25th day of the Hebrew month of Kisler. In Hebrew, the menorah is called hanukiyah. There are nine candle holders, eight for each night, and one called Shamash, which is used to light the other candles. Traditionally, the candles are placed on the menorah right to left, but lit left to right. Historically, the dreidel game was played to camouflage Torah study during Antiochus’ reign.

In Hebrew the word Chanukah means “rededication.” Of what you ask? Read on for some history…

The story of Chanukah begins way back when Alexander the Great conquered Syria, Egypt, and Palestine. Alexander allowed his new lands to continue observing their religions, but still may Jews assimilated to Greek customs and beliefs. Succeeding Alexander was King Antiochus, who began to oppress the Jews. Antiochus even required the sacrifice of pigs on the alter (that is NOT kosher).

In about 200 BCE, the Judean (now Israel) Syrian King, Antiochus, demanded that the Jews to reject their God, religion, customs and beliefs and worship Greek gods. Despite the king’s wishes, Judah Maccabee rebelled and refused to worship any god but his. Together with his four brothers, Judah started an army. Three years later, the Maccabees drove the Syrians out of Israel. They reclaimed their temple in Jerusalem, cleaned and removed Greek symbols and statues, and wanted to light the ne’er tamid, which is an eternal light that is present in every Jewish house of worship. Searching the whole temple, they only found a flask with a small amount of oil left that had the seal of the High Priest. That little bit of oil lasted eight miraculous days.

You may think the reason Chanukah lasts eight days is because of the teeny bit of oil, but there could be some who beg to differ. The Book of Maccabees says the Jews celebrated the rededication for eight days, so Judah and his brothers decided the days of dedication and congregation should be observed every year for eight days. However, another interpretation is that the eight days commemorate Hannah, mother of Saul (Samuel), and her seven sons who were tortured and executed according to Antiochus’ policy when they refused to bow to a Greek statue and taste pork.

The story of Chanukah is related in the Book of Maccabees, which the Jews do not accept as scripture. So, in reality, Chanukah is not a very important religious holiday. Well, it may not be important religiously, but for all those who receive presents, it may just be the most important eight days of the year. The only traditional gift is “gelt,” a small amount of money.