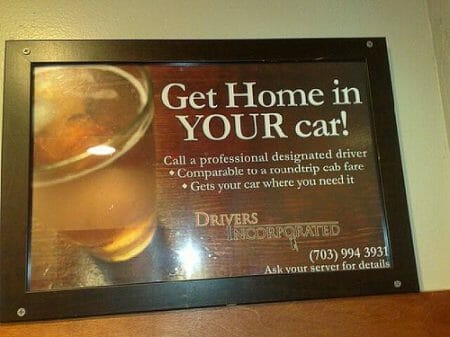 (PCM) The concept of a designated driver is one that certainly most all of us have heard of by now. Anyone that plans on spending a night out partying, especially drinking, should always be sure to have a designated driver put in place to ensure that everyone arrives home safe and secure.

Designated drivers are important all the time to prevent anyone from driving under the influence, however, they become even more important during the holiday season, which in addition to spending quality time with family and friends, also leads to attending many parties and social functions which may also including drinking.

The term designated driver is actually a relatively recent term, as it was first blasted into the pop culture psyche back in 1988. It was in that year that Harvard Medical School partnered with film and TV studios to insert the concept of “designated driver” into overall popular consciousness. To this very day the project continues to be a huge success, as once people reach the legal drinking age, and even before are mostly all aware of just how necessary it is to have a designated driver in place should they find themselves in a position where they are overly intoxicated and should place themselves behind the wheel.

All of the major Hollywood studios agreed to take part in the campaign, as well as, the three major televisions networks at the time which were NBC, ABC and CBS. To go along with the campaign TV writers made an agreement with the Harvard Medical School team to include drunk driving prevention message, which frequently mentioned the term “designated driver” into many of their popular series such as “Cheers” and “The Cosby Show” at the time. This trend continues to this day. According to the Huffington Post, “Over a four-year period, more than 160 prime-time programs incorporated sub-plots, scenes, and dialogue on the subject, including frequent references to the use of designated drivers.”

The networks also began airing frequent public service announcements spotlighting the dangers of driving under the influence and the importance of using a designated driver. The campaign soon launched to a national level and many celebrities and prominent political figures joined the cause to promote and endorse the “designated driver” idea. To firmly cement that the term “designated driver” had now become a household phrase, the term was added to the Webster’s College Dictionary in 1991.

Also, according to the Huffington Post, “When the campaign began in late 1988, annual alcohol-related traffic fatalities stood at 23,626. By 1994, fatalities had declined by 30%. A variety of factors were responsible for this striking progress, including intensive publicity, new laws, and strict enforcement.”

It is still so unfortunate that fatalities still continue to occur as a result of individuals still continuing to drive under the influence, knowing that they should have called a designated drive instead of getting behind the wheel. Even ride share services such as Uber and Lyft can assist individuals with obtaining a designated driver for the evening if none of their friends or family want to step up to the task.

Always remember to not be afraid to say something if you see someone getting ready to get behind the wheel after a night of heavy drinking. Just voicing your opinion and offering to be their designated driver for the evening could end up saving not only their life, but the lives of others as well.

This entry was posted in Law Breaking, Lifestyle, News, Wellness