A Love Story Too Good To Be True Or Is It? 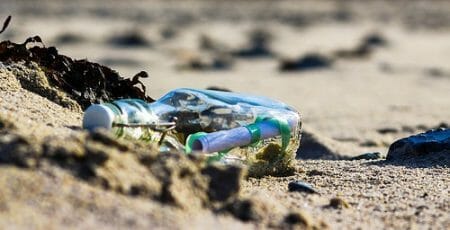 (PCM) Over the course of history we have heard many tales involving messages being placed inside of a glass bottle and sent out to sea. Surely, many of these messages never even come to close to making it to their intended destinations, let alone someone actually recovering the bottle and responding to the message inside.

Many stories that involve a message in a bottle sent off to a far away lover have been proven to be nothing more than a hoax or a fairy-tale, that is except for one! The love story between Ake Viking and his eventual wife Paolina is one that is almost too good to be true, but guess what? It is totally one hundred percent true!

Paolina and Ake Viking were married in 1958 after being brought together by a message tucked into a bottle that Paolina’s father, who was a fisherman in Sicily, had discovered at sea. The story goes that Ake Viking, a Swedish sailor, was bored while out at sea one day and decided to slip a message into a bottle requesting that any pretty girl who found it to please write back. Paolina’s father had passed the bottle off to her as joke, however Paolina decided to continue the joke and wrote a letter back, just to see what would happen.

Soon, Paolina and Ake were exchanging more and more letters with one another and they also began to develop warm feelings for one another. Eventually, Ake traveled to Sicily to visit his message-in-a-bottle love and once they had finally met in person, they were married very quickly.

The news of their unique love story soon spread and the pair were even featured as an article in the publication “American Weekly” title “Love In A Bottle”. You can read the article below:

Ake, a Swedish sailor, relieved his tedium at sea one day in 1955 by writing a letter. “To Someone’Beautiful and Far Away,” he poetically inscribed it. After giving his home address and a brief description of himself, he added, “Write to me, whoever you are,” and signed his name. With that, he tucked the paper into an empty bottle of aqua vitae, replaced its cork and tossed it overboard. Two years went by. Then, on his return from another voyage, he found a letter, postmarked Syracuse, Sicily. The message was in Italian, which one of his shipmates obligingly translated. It was from a 17-year-old girl, who wrote: “Last Tuesday, I found a bottle on the shore. Inside was a piece of paper, bearing writing in a strange language. I took it to our priest, who is a great scholar. He said the language was Swedish and, with the help of a dictionary, he read me your charming letter. I am not beautiful, but it seems so miraculous that this little bottle should have traveled so far and long to reach me that I must send you an answer …” Other letters, consigned to ordinary post, followed the first two. Photographs were exchanged and, finally, vows. Ake set sail for Syracuse and now, together, he and his pretty, if not beautiful, correspondent, who has just turned 18, are embarked on the sea of matrimony.

Always remember that true love has no boundaries and it can often bloom in the strangest of places, even within a bottle that has been sent out to sea.

This entry was posted in Family, Life, Lifestyle, News