McDonald’s Introduces Mozzarella Sticks, But They Forgot One Thing! 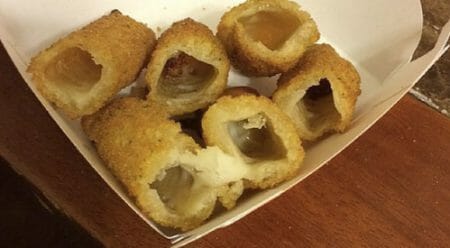 (PCM) Fans of fast-food chain McDonald’s were incredibly excited when the news was announced that the company would now be adding mozzarella sticks to their menu nationwide. Customers who had been waiting patiently to try the new cheese sticks were left incredibly disappointed when after ordering their mozzarella sticks one very important component was missing … the actual cheese!

Being that we live in the day and age of social media, customers immediately began posting images of their cheese-less mozzarella sticks on both Twitter and Facebook, tagging McDonald’s and expressing their displeasure.

The company was quick to issue and apology to customers and claim that the cheese may have melted out during the baking process in their kitchens and that those mozzarella sticks should never have been served.

The company goes on to say that they are working on a solution to the problem and have been sending out coupons for a free replacement order of mozzarella sticks to any customers who were affected. Hopefully, the new mozzarella sticks will actually contain cheese!