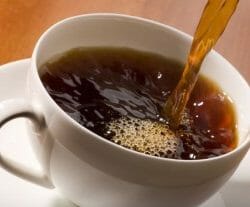 Mommy blogs are buzzing today over one mom’s home remedy for her son’s ADHD – or what she believes to be ADHD. Christie Haskell told Good Morning America that her 7-year-old son, Rowan, has the classic symptoms of Attention deficit hyperactivity disorder, otherwise known as ADHD. So she did what lots of other people do when they are looking for a diagnosis or cure – she ‘Googled it’! Without an official diagnosis, Haskell turned to the internet in search of home remedies and treatments that would help control her son’s attention problems.

“At home there was a lot of just hyperactivity,” she told ABC News. “Not being able to his hands to himself, talking when he’s not supposed to talk, lack of concentration or ability to concentrate when he needed to.”

She didn’t want her son to be put on medication that is normally prescribed to children with ADHD, like Ritalin. So she found a natural, more unusual treatment: coffee. Twice a day, every day, Rowan now gets a four ounce cup of coffee, and she says it’s working!

“He doesn’t overreact if we ask him to pick up Legos, rather than screaming and throwing himself on the floor,” she said. “And if we ask him to sit down and do homework, he can actually do it.”

And Rowan seems like to it, too! “It tastes good,” he told ABC. “And it calms me down.”

But, not everyone likes the idea of giving 7-year-old children coffee. Doctors warn there is no evidence that coffee works as a treatment for ADHD, and it can be dangerous. Side effects of caffeine include dependence, twitching, higher heart rate, agitation, nervousness, higher blood pressure, headaches – all of which can effect children’s developing bodies more than adults.

Check out what people are saying, from parents with children with ADHD to teachers and doctors, at Goodmorningamerica.com or read Christie Haskell’s blogs and comments at thestire.cafemom.com!