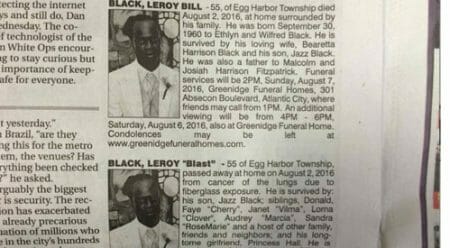 (PCM) An Egg Harbor Township, New Jersey man by the name of Leroy Black passed away at the age of 55 and his death is creating quite a stir due to the fact that he has received dueling obituaries from both his “loving wife” and “long-time girlfriend”. Oh, to be a fly on the way at this upcoming funeral service!

Both obituaries include the fact that Black passed way due to “cancer of the lungs due to fiberglass exposure” and was surrounded by his family and loved ones at the time of his death. However, one keen reader of the “Press Of Atlantic City” noticed that there were some key differences between the two published obituaries.

One of the major glaring differences between both obituaries was in the list of survivors. In the first obituary, Black’s “loving wife” Bearetta Harrison Black is listed first as his survivor, however in the second obituary Bearetta’s name is nowhere to be found and it has been replaced by the words “survived by his long-time girlfriend, Princess Hall”.

Something tells us there will still be some sparks flying at Mr. Black’s funeral, but let’s hope his is now resting in peace!

This entry was posted in Debatable, Life, News, RIP