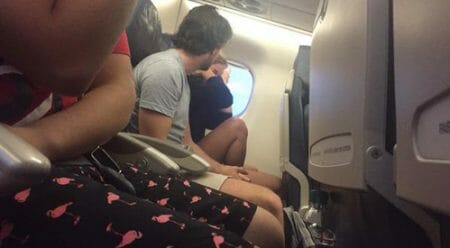 (PCM) It is amazing just how quickly someone’s personal business can turn into a viral trend via social media in seconds. Such is the case that happened recently, when another passenger on a delayed North Carolina flight hilariously began live tweeting a couples incredibly awkward break-up that was occurring on the plane.

A passenger by the name of Kelly Keegs was seated across the aisle from the couple and tweeted a play-by-play of the couples break-up to her several thousand Twitter followers. Her live-tweets were so funny that soon enough #PlaneBreakup began trending!

You can see a few of Keegs tweets below and read the entire ordeal here!

This guy on the plane just broke up w his girlfriend and she’s SOBBING pic.twitter.com/IW9QVYxXdB

We took off, they immediately ordered SIX vodkas and Bloody Mary mix for the 50 minute flight and chugged them in silence between makeouts

The entire ordeal ended with the couple making out with each other between drinks and awkward silence, so are they together or broken-up?  Either way, we can imagine it was certainly one way to get some in-flight entertainment for free.