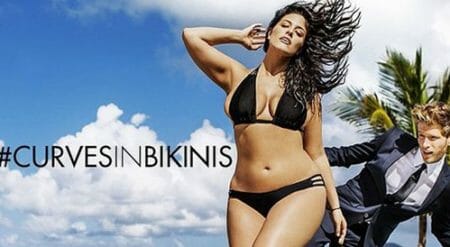 (PCM) This year the Sports Illustrated Swimsuit issue is definitely generating a lot of buzz. For the first time ever the issue will feature plus-size model Ashley Graham.

Graham, who has also modeled for plus-size clothing retailer Lane Byrant, hails from Lincoln, Nebraska and is a size 14/16.  She is featured in an ad in the magazine for a bathing suit company called “Swimsuits For All”.

The ad is for the company’s new campaign #CurvesInBikinis that has the goal of helping all women feel confident and sexy in any type of swimsuit they choose.

Many statistics have shown that the average American woman’s size is a 14 and that is where most plus-size clothing begins, although there are some that say even women sized 10 to 12 are considered plus-size by today’s standards.

Graham says that she knows her curves are sexy and claims “The world is ready for more curves in bikinis”.   She is a strong supporter of endeavors that support and encourage women to love their bodies. She is also a founding member of ALDA, a coalition of models working to promote beauty and healthy body image beyond boundaries and limitations of size.

The upcoming SI Swimsuit Issue is also receiving a bit of criticism about the bikini worn by this year’s cover model Hannah Davis.  Many are claiming that the cover is just too risque and borders on being considered pornographic.

The cover pose features Davis, seductively tugging the bikini bottoms down. One more inch and they seriously would have had a problem.

The bathing suit leaves very, very little to the imagination and we can all clearly see that Davis is a fan of the Brazilian wax, if you get what we mean!