The Why Of Winnie The Pooh

The Why of Pooh 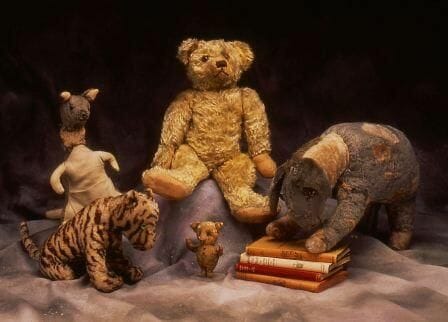 At the turn of the 20th Century something strange took place in the world of literature.  A new page was turned, and a new genre born.  The world of Children’s literature came to light.  There had always been stories for children.  Mother Goose was fist published in 1780.  The Brothers Grimm let their Fairy Tales loose on the world in 1812.  The legends of Robin Hood and King Arthur though not essentially works for children had been known for many years.  Alice in Wonderland was published in 1865 and though there may been other books for children published in the late 1800s none of them gained much notoriety.

It was the beginning of the 20th century that books for children came into their own.  Titles still read today by the very young began to flourish.  Peter and Wendy by JM Barrie was published, this was the novelization of Barrie’s stage play Peter Pan.  The Secret Garden by Francis Hodgeson Burnett, The Wind in the Willows by Kenneth Graham, The Wizard of Oz by L Frank Baum and finally in 1925 Winnie The Pooh.

It has been often said that there are three characters that everyone knows, Sherlock Holmes, Mickey Mouse and Superman, but in this day of high speed internet, web publishing and down loadable books, where information and stories of every kind are there for the taking I believe many other fictional characters are also known worldwide.  Batman is certainly right up next to Superman, Harry Potter is a major 21st century Phenomenon, Snoopy is also known all over our planet but most of all Winnie The Pooh. 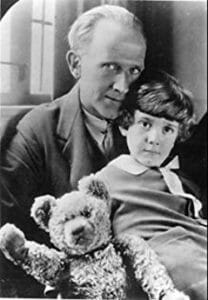 Strangely Winnie the Pooh was not the first work for children that his author AA Milne published.  Milne began first as a novelist and playwright.  He delved into children’s literature with poems written for and about his son Christopher Robin.  His first poem Vespers was sent to Vanity Fair by his wife and it was published in 1923.

Mr. Milne was walking by the nursery one evening when he over heard his son saying his prayers.  He was immediately struck with an idea and went directly to his study.  In very short order he wrote the poem Vespers.  He ran straight downstairs and showed the poem to his wife.  She liked it and so he told her that if she could sell it she could have whatever money came from the sale.  As mentioned already Daphne Milne was able to sell the poem to Vanity Fair and she received 50 pounds for the effort.  This was in 1924 and 50 pounds was a great deal of money, but that wasn’t the end of it.  Vespers, all by itself earned Mrs. Milne around one million pounds in her lifetime.

Little boy kneels at the foot of the bed,

Christopher Robin is saying his prayers.

Wasn’t it fun in the bath tonight?

The Cold’s so cold, and the Hot’s so hot.

If I open my fingers a little bit more,

I can see Nanny’s dressing-gown on the door.

It’s a beautiful blue, but I hasn’t a hood.

And pull the hood right over my head,

And I shut my eyes and I curl up small,

And nobody knows that I’m there at all.

Oh! Thank you God, for a lovely day.

And what was the other I had to say?

Winnie the Pooh made his grand entrance on Christmas Eve in 1925.  He was featured in a short story published in the London Evening New titled “The Wrong Sort of Bees.”  This story would be the first in the book titled Winnie The Pooh which was published in 1926. 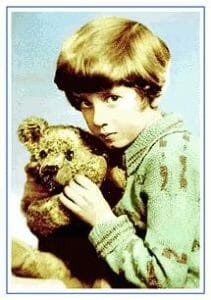 Christopher Robin Milne was born in 1920.  Because of his difficulty in pronouncing the family name he soon had the nickname Billy Moon for Christopher, whenever he said Milne, it came out Moon.  Not long after his birth his parents bought him a stuffed bear at Harrods.  The bear was named Edward but as the child grew older he would often visit the London Zoo there he would become acquainted with a black bear rescued from Winnipeg and named Winnie.  The name Winnie combined with a name he gave a swan in the park “Pooh”, would magically transform into the name of the most famous bear in the world Winnie The Pooh.

The stories of Winnie The Pooh and his friends Piglet, Kanga, Roo, Eeyore and Tigger did not begin at the author’s type writer.  They instead began on the floor of the nursery where Milne’s wife Daphne would create personalities for her son’s toys and tell him stories of their grand adventures.

Pooh, Kanga, Piglet, Eeyore and Tigger were the actual toys Christopher Robin played with in his nursery.  The toys themselves can be seen at The New York Public Library.  The characters of Rabbit and Owl were added to Milnes stories by Milne himself and the character of The Beaver made famous in the Disney animated shorts was never in the books at all.

We live in a very different world than the one that Christopher Robin and AA Milne grew up in.  We have Television, DVDs, Movies video and computer games to fill our time and help fill our imaginations.  This was not the case in the late 1800s and most of the 20th century.  Children played outside more and used their imaginations in ways that  may have gone by the wayside today.

Before 1990 if you wanted to play army you got sticks for guns and made up sides and ran around the neighborhood delightfully killing each other.  In the  1970s, if you hung out with girls as well as boys, the girls happily became nurses on the front line bandaging up imaginary wounds.  If army wasn’t your thing maybe you played superhero and everyone found towels to tie around their necks.  You pretended to fly if you were Superman or you swung around on ropes if you were Batman fighting villains like the Joker or Brainiac.

Your backyard or your local park or stream or abandoned buildings or other unused property became a wonderland of places to have adventures in.  You never won the war or captured the villain, but you had hours of fun trying and using your imagination to its fullest.

Christopher Robin grew up at a place called Cotchford Farm and all the places mentioned in the Winnie The Pooh books come from the lands surrounding his home.  The 100 Acre Wood is a real place where Christopher Robin would go and have his own imaginary adventures.

A lot of the Pooh stories were also inspired by AA Milne’s childhood adventures with older brother Ken.  Alan Alexander Milne and his brother would often get up early and go for long walks in their own parks that were close their childhood home.  Their father was a school master who owned his school so getting home in time for class was easy for the two brothers.  Alan was a keen minded youth who under his father’s teaching had very little trouble with his lessons.  In many ways Alan would do much better in school than his older brothers.

One of the teachers in Milne’s school was a young HG Wells who encouraged Alan in his writing and other scholarly pursuits.  Milne went from his father school onto a private boys boarding school which was the fashion of that day.  From boarding school Alan attended Cambridge University where he began to write for college publications.  He would graduate from Cambridge but not with the best grades.

Milne would constantly be submitting his work to Punch Magazine and eventually he was accepted and soon would be come an editor of that prestigious publication.  Milne would go on to write novels, at least one a detective story especially for his father and several plays that were met with great acclaim some still produced today in regional and community theater.  Kenneth Graham approached Milne to write a stage dramatization of his children’s book The Wind in the Willows which Milne accepted gladly and, though it took several years to complete, the story eventually it made on to the stage renamed Toad of Toad Hall.

If you notice in the Pooh books, much like childhood itself, nothing is ever really accomplished.  Pooh tries for Honey but he cannot get at it.  He searches for The North Pole but he does not find it.  He tracks a heffalump but he never captures it.  This is the essence of our own out of doors imaginary adventures we play at them but we do not succeed because it is impossible.  When mom calls us in for dinner we are immediately back from the arctic and the guns that we so bravely carried into battle are once again sticks that we drop on the ground as we run home.

The charm of the Winnie The Pooh stories and their enduring popularity lies in this wonderful world of real childhood experience.  They are stories that comfort us more than they excite us.  They make us feel safe and secure.  Christopher Robin is the adult in all of the Pooh stories.  He takes the place of the parental figures.  He is the one the toys could go to have all their problems solved.  The animals worried when they could not find him much like a young child will cry when mom or dad are not in view.

Today children can sit in front of a video screen and have adventures where they can wield guns and kill people on the screen.  They can be, or at least control a superhero with a joy stick.  They can get lost in much scarier woods than the forest or the park down the street.  They stay indoors and play but in that play the imagination has little use.  All the imagination has to do is accept what it sees on the screen as reality.  It does not have to make the reality up on its own.

JM Barrie wrote Peter Pan out of the imaginary adventures he had with the 5 Llewelyn Davies boys that he would day become guardian of.  Lewis Carrol wrote Alice in Wonderland in the same way.  Are our children capable of the type of play today that would enable them to write the next great piece of children’s literature tomorrow?  Or are they so engrossed in the little world that they see on the screen that they have completely lost track of the bigger world inside their own heads?

W are in a changing world, but all is not lost.  As long a s parents pick up books like Winnie The Pooh and read aloud to their children there may still be a bright future ahead.

This entry was posted in Arts & Entertainment, Books, Life, Parenting


Tags: AA Milne, Christopher Robin, Now We Are Six, Vespers, When We Were Very Young, Winnie The Pooh