This is Jacobi Oscar Kafer, by Ginger Fish

This is Jacobi Oscar Kafer.
BY: Ginger Fish 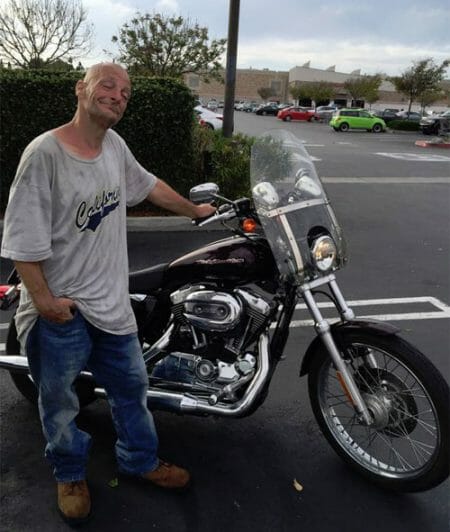 I stopped for coffee & to go the bathroom at a Starbucks in the Venice, CA area, & this gentleman walked up to my cycle today to spray windex on it, & clean it. My first reaction was “Stay away from the bike” then I stopped myself; he looked broken & mentally & physically worn from the sun, so I turned to him and said “Go ahead and clean it, I’m gonna run into Starbucks for coffee, & when I come out I’ll give you $10”.

I’ve been meaning to clean my bike but I just haven’t found the time to do it. The Starbucks was busy & I wondered when I came back out if he would still be there. When I returned, he was working up, down, & all around the bike. I’ve had my bike detailed at my local Harley dealership & it costs around $150 for them to do the same job this gentleman is doing right now for a fifteenth of the cost.

I finished my coffee & told him I didn’t want to take up anymore of his time today. I reached into my pocket & pulled out all of the spare bills I had that totaled a whopping $36 & handed them to him. I said I wished I had more to give him, & the expression of respect and joy that built up inside of him was immeasurable.

As I bent down to unlock my Helmet, and after I had put it on my head, I reached into my saddle bag to organize a few things I was carrying, and as I did this, he starting working feverishly scrubbing my helmet clean right as I knelt there wearing it. I thanked him for a job well done & went on my way. I got about a half mile away when I decided to turn around.

I found Jacobi in the corner of the parking lot crying with his head held down as tears ran down the bridge of his nose, as if to say I’ve had enough of the struggle & humiliation today. I asked him if could please take a photo of him with my cycle so I could remember him & this job he has done so well. Again he filled with great joy and gratitude for the little bit of respect I bestowed upon him.

He stood proud and strong with an inherent sense of satisfaction & pride for his ability to bring happiness to another person & to contribute to something that brought someone else so much joy today. I was homeless for about a year around 1990 & 1991, so I understand some of what this man has to endure on a day to day basis. As I thanked him again & began to exit, more tears started streaming down his face.