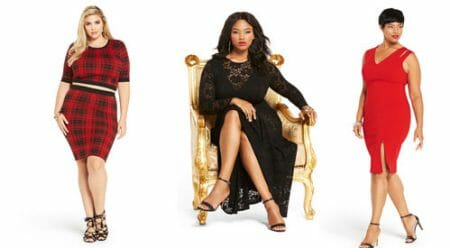 (PCM) We adore both Torrid and Empire so this is a true win win!  Torrid, the fastest growing plus size fashion brand in America, and 20th Century Fox Consumer Products are pleased to announce the “Empire” fashion collection, featuring designs inspired by the hit TV show, which premieres its third season on FOX September 21. The limited edition collection launched and is available exclusively at Torrid.com.

A closer look at each piece reveals intricate details: the ombre hues of Cookie’s luxurious faux fur coat, lace-up detailing on her curve-hugging blazer and pants, the zip-up side slit in Anika’s siren red dress. Sexy silhouettes demand attention in bold colors and custom prints. The collection is bound to be a smash hit with Torrid and EMPIRE fans alike.

“We’re huge fans of ‘Empire’ and our customers love it too,” says Kate Horton, SVP, General Merchandising Manager at Torrid. “So, we’re super proud to have designed this ‘Empire’ fashion collection. Now women of all different shapes and sizes can dress like the show’s leading characters: Cookie, Anika, Rhonda, Porsha and Becky.”

Entering its third season, “Empire” continues to shatter records, finishing the second season as the No. 1 show on broadcast television. Named a Top 10 Television Program of the Year by the American Film Institute, “Empire” was the only broadcast series to earn a Golden Globe Award nomination this past year in the category of Best Television Series – Drama. Additionally, Taraji P. Henson won the Golden Globe for Best Performance by an Actress in a Television Series – Drama and recently was nominated for an Emmy Award, for the second year in a row, in the category of Outstanding Lead Actress in a Drama Series. Also, the Season One soundtrack was nominated for a 2016 Grammy Award for Best Compilation Soundtrack for Visual Media.