Why Katniss Everdeen Should Be on Every Reader’s Bookshelf 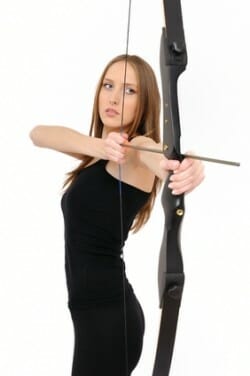 (PCM) Moms have a lot to worry about these days, not the least of which is the entertainment content their children are exposed to. You’d think the ratings systems deployed on television programs, films and video games would help. Unfortunately, in a lot of ways, they’re not that useful. They tell you about content, sure, but what about messages, themes and lessons?

Tween girls across the nation were swept away by “Twilight” mania. There’s no gratuitous sex and there’s not even significant nudity – excepting the werewolves, but they’re wearing more than the models on an Abercrombie Fitch bag – no teen drinking or drugs and no realistic violence or glorification of weapons. Sounds safe, yes?

I’d argue just the opposite. By indulging our children with the “Twilight” series as entertainment, we’re placing some pretty twisted ideas about love, family and relationships in their heads. The main character, Bella, fancies herself a misfit. She’s smart and beautiful, yet she’s convinced there’s no peer group for her out in that big, wide world. Rather than meeting new people, bonding over the newest download games and pop music, she refuses to make an effort. Upon arriving in a new town to live with her father, she meets Edward. He’s actually quite rude to her, but he’s intriguing and beautiful and mysterious and alluring. So, naturally, like any teen girl, she’s interested in him.

Then, he saves her life and they become a couple. Out of the blue. He’s a vampire and all he wants to do is drain her dry. He doesn’t want to kill her, but it seems inevitable that he or one of his coven will lose control and eat Bella. Her life is literally at risk every moment she spends with or near him. She knows this, and yet, they go on with their relationship. By the end of the series, she’s risked her life and been near death several times. She’s thrown away every chance at a normal life and cut off her friends and family all just to be with Edward. What does that sound like to you? To me it sounds like an episode of “Intervention” on AE. But it all ends well, because it’s fiction, and the author can do as she pleases. There are no genuine consequences for any of the main characters and so, this is not a cautionary tale, but a dangerous one.

Take, on the other hand, “The Hunger Games” series by Suzanne Collins. Also targeted at a young adult audience, this book has most of the elements that would make ratings-wary parents shy away from it. You’ve got weapons, crimes, killings, drinking, sexy costumes on teenagers, the glorification of gladiatorial combat – a veritable smorgasbord of adult themes. Yet, I think it should be required reading for our teenagers. Why?

The most dynamic debate coming out of four tomes of “Twilight” books is simply this: Team Edward? or Team Jacob? Encouraging your kids to read and discuss the plight of Katniss, Peeta, et al will certainly be a far more enriching experience for the whole family.