The Sad Story Of Why Wheelchair Barbie Disappeared! 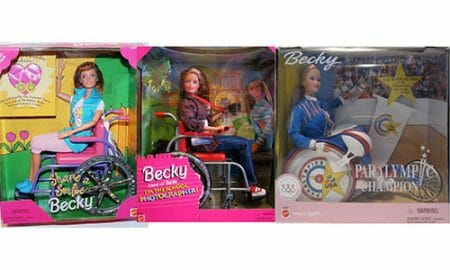 (PCM) We have to give Mattel some credit for their attempts to expand their Barbie brands diversity over the years. Currently, Barbie dolls are offered with three new body types which are petite, curvy and tall that provide a much more accurate portrayal of how women of today actually appear. For years parents had been making complaints that the original Barbie doll body-type provided unrealistic body image standards for young women across the world. The dolls created a “social norm” for what is considered beautiful for example the skinny waist and blonde hair and blue eyes, but people realized over the years that majority of the population doesn’t even look close to that and parents wanted their children to have a better role models, at least in terms of their toys. No doubt the move was also made as a way to boost Barbie’s declining sales, as parents were much more keen on purchasing other type of dolls that showed more attitude and diversity.

Mattel also decided to make the newer Barbie dolls more ethnically diverse as well. The dolls are now offered with seven skin tones, 22 eye colors and 24 hairstyles allowing young women to choose the type of doll that they can best relate. While it is wonderful that Mattel has gotten with the times and realized that beauty comes in a variety of shapes and sizes, but what about young women who are disabled or suffering other types of medical conditions. Where is the Barbie doll that speaks to them? Sadly, she disappeared many years ago and has yet to resurface despite a growing demand. Although it is worth mentioning that Mattel did create the Ella doll which is another friend of Barbie who is battling cancer. The doll is bald and aims to help children better understand hair loss that is common among cancer patients.

This is where we get to the sad story of Wheelchair Barbie and the “Share-A-Smile Becky” dolls. In 1997, Mattel released the “Share-A-Smile Becky” Barbie dolls. The Becky dolls were disabled and came with a toy wheelchair, however due to a ton of controversy, which we will look at in a second, the dolls were sadly pulled from the shelves and a disabled Barbie doll has not been created since that time. In addition to the “Share-A-Smile Becky” dolls, Mattel also created the “Becky I’m A School Photographer” doll and a special “Becky: Paralympic Champion” doll that was produced in 1999 in time for the 2000 Olympics in Australia. But since then Becky has ceased to exist.

Just what was the issue with the “Share-A-Smile Becky” dolls? To start, Becky wasn’t actually Barbie. She was a friend of Barbie, who sadly would never be able to visit her dear friend because it was pointed out that the Barbie dream house is not handicapped accessible. The Becky dolls wheelchair didn’t even come close to fitting the elevator and also her long hair became easily caught up in her wheelchair wheels, making for quite an awkward situation. The “Share-A-Smile” Becky dolls were later revamped and did fly off the shelves when they were released.  Wheelchair Becky, with her modern style and pink and purple wheelchair became a positive role model and showed that less able people can still be fashionable and fun. However critics still stood behind the argument that the doll was pigeon-holing wheelchair users and also the issue of Becky’s accessibility to Barbie accessories such as the dream house, car and other item was still a major problem.

Despite high sales numbers for the first batches of “Share-A-Smile Becky” dolls, Mattel decided to pull the character without giving much of an explanation. It is assumed that Mattel made the decision to stop producing the dolls because it would require changing all of the other products that Barbie customers bought to go with their dolls. It became a situation where it was far less expensive for Mattel to just pull the doll rather than have to change their entire product line to be able to allow Becky to have the access she would require. Seems kind of wrong doesn’t it? A company not wanting to adapt their products for someone less able-bodied? We know we are talking about toys here, but it is a mentality that can definitely follow through into the real world.

Mattel will not confirm or deny the reasoning behind pull the Becky dolls from the shelves, however when questioned by a parent who was in search of the dolls back in 2006 the company had the following response. Sara Rosales, vice president of communications for Mattel Brands at the time, said that Mattel only ever planned the Becky doll as a temporary part of its 1997 line and had never proposed to produce it since then. She added that the company might create another wheelchair-using doll in the future but has no definite plans to do so. Well, there you have it and we are still waiting!