Where Do Blue-Eyes Really Come From? 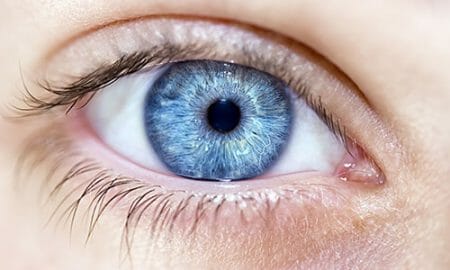 (PCM) Did you know that all blue-eyed human beings are said to have a single common ancestor? A research study conducted by the University of Copenhagen in 2007 revealed that blue colored eyes are caused by a single genetic mutation that occurred 6,000-10,000 years ago. This research proves that all blue-eyed individuals can be linked back to this single common ancestor who resided in a region near the Black Sea.

In the beginning we all had brown eyes and then over the course of many, many years several genetic mutation occurred in various individuals which caused our eye colors to begin changing. According to Science Daily, ” A genetic mutation affecting the OCA2 gene in our chromosomes resulted in the creation of a “switch,” which literally “turned off” the ability to produce brown eyes.” The OCA2 gene codes for the so-called P protein, which is involved in the production of melanin, the pigment that gives color to our hair, eyes and skin. The “switch,” which is located in the gene adjacent to OCA2 does not, however, turn off the gene entirely, but rather limits its action to reducing the production of melanin in the iris — effectively “diluting” brown eyes to blue.”

It is this very same process that can explain why some individuals have green or hazel eyes rather than just plain brown, as it is linked to the amount of melanin within the iris. Blue-eyed individuals only have a very small degree of variation which has led the researchers to conclude that all blue-eyed individuals came from the same single ancestor. They all have the exact same switch in melanin levels to create the blue colored eyes in their DNA at the same spot. When blue-eyed individuals from Jordan, Denmark and Turkey were examined, their genetic difference was traced back to the maternal lineage.

The idea that every blue-eyed human being shares the same genetic mutation is pretty fascinating and to this day there is a still a ton of research behind the ways that various genetic mutations effect the overall evolution of the human population. Researchers have yet to identify the one Eastern European individual who was responsible for the initial genetic mutation, but the quest is still on! The earliest discovery of blue-eyes belonged to a 7,000 year old skeleton that was discovered in northern Spain. Obviously, the eyes had long since decayed, however genetic analysis revealed that they would have appeared blue in color.

Putting genetic mutations aside, John Hawks of the University of Wisconsin-Madison posed an interesting question about just why we went from having no one on Earth with blue-eyes 10,000 years ago to having nearly 40% of Europe having blue-eyes now. He jokingly answered his own question by saying ““This gene does something good for people. It makes them have more kids.”