Earliest Case Of Child Exploitation: A Look At The Dionne Quintuplets 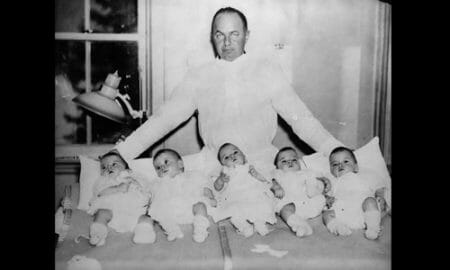 (PCM) On May 28, 1934 an anomaly occurred with the birth of five identical sisters marking the first time that a set of quintuplets had managed to survive infancy and grow up into adulthood. The Dionne sisters (Yvonne, Annette, Cecile, Emilie, and Marie) were born in Canada, just outside Callander, Ontario and caused quite a spectacle in the region.

In the year of 1935, after spending only a mere four months with their birth parents, the quintuplets were taken away from their parents and custody of the sisters was given to the Canadian government.  They were made Wards of the King for the next nine years under the Dionne Quintuplets’ Guardianship Act, 1935.

The Canadian government claims that they took custody of the Dionne Quintuplets in order to protect them from being exploited, as the quintuplet’s mother Olivia Dionne had been contacted by various fair exhibitors from Chicago’s “Century of Progress” exhibition to have the babies put on display for the world to see. Being poor, Olivia agreed, however the contract was revoked over concern that the children would exploited. It should be noted that it was not uncommon to put incubator babies on display at various exhibitions during this time period. Laws prohibited children from being put on display were not put into effect until several years later.

The irony of in the case of the Dionne Quintuplets is that they ended up being even further exploited once they were taken into custody by the Canadian government, which was supposed to be protecting them. The government and those around them began to profit off of the quintuplets by making them a significant tourist attraction in Ontario.

While their mother Olivia did remain a part of the sister’s guardianship, the babies were taken from their home and moved across the street to the newly built Dafoe Hospital and Nursery and lived there until they were nine years old. The government realized how much of a public interest there was in the quintuplets and ended up building a tourist industry around them. 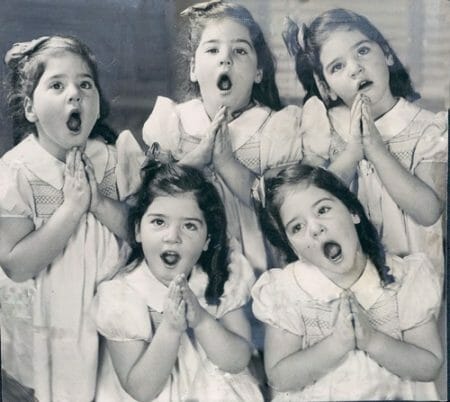 By 1937, Canada had made them their largest tourist attraction where they starred in movies, product ads, had dolls made after them, and had 3,000 daily visitors through exhibit glass. The girls were taken outside to play two to three times a day for about 30 minutes and at that time they could be viewed by tourists who were behind one-way screens.

When spoken to later about their abnormal upbringing the sisters claimed that they were incredibly sheltered from the outside world and they could hear the tourists that were coming to visit them, but they would rarely see them. They only occasionally visited with their parents and other siblings across the road. It was as if the quintuplet sisters were living in a human zoo and part of a large science experiment.

Approximately 6,000 people per day visited the observation gallery that surrounded the outdoor playground to view the Dionne sisters. Ample parking was provided and almost 3,000,000 people walked through the gallery between 1936 and 1943. Oliva Dionne ran a souvenir shop and a concession store opposite the nursery and the area acquired the name “Quintland”.  Oliva also sold stones from the Dionne farm that were supposed to have a magical power of fertility.

In November 1943, the Dionne parents won back custody of the sisters. The entire family moved into a newly built house within walking distance of “Quintland”. The yellow brick, 20-room mansion was paid for out of the quintuplets’ fund. The home had many amenities that were considered luxuries at the time, including telephones, electricity and hot water and was nicknamed “The Big House”.

According to the accounts of the surviving sisters, the parents often treated them at home as a five-part unit, and frequently lectured them about the trouble they had caused the family by existing. They were sometimes denied privileges the other children received, and were more strictly disciplined and punished. They also received a heavier share of the housework and farm work. They were unaware for many years that the lavish house, the expensive food and the series of cars the family enjoyed were paid for with money they themselves had earned.

The Quintuplets ended up leaving the family home when they turned 18 in 1952 and maintained very little contact with their birth parents after leaving. It was not until 1998, that the sisters after a lengthy legal battle with the Canadian government, reached a settlement for the amount of $2.8 million as compensation for their years of childhood exploitation.

By 1998, two of the quintuplets, Émilie and Marie, had died, leaving the other three Yvonne, Annette and Cecile to split the compensation money. Yvonne sadly passed away in 2001, leaving Cecile and Annette as the only two surviving quintuplets. Ever since leaving home at age 18 they had done their very best to remain out of the public eye and lead more sheltered live.

Both Annette and Cecile have recently come forward this year in an effort to save their birthplace cabin home from being demolished, as the Canadian government no longer wants to pay for it’s up-keep, as it was being used as a museum dedicated to the DIonne Quintuplets legacy. Currently, it’s fate is still up in the air!

This entry was posted in Celebrity, Family, Life, News