Pauly D and The Situation. What do they have in common besides the fact that they are both self-acclaimed, fist-pumping Guidos who have made a name for themselves on MTV’s Jersey Shore? They are both the oldest on the show. 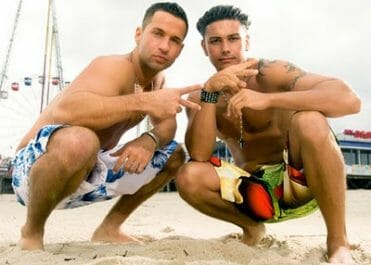 Warning: Juiceheads come with age! That’s the thing about the shore; you go there as a bright-eyed 21-year-old expecting to meet other amateur drinkers in this adolescent scene, and you wind up meeting much older men. Pauly D is now 31 and The Situation is now 29. Some people might have noticed that 30-year-olds still going to the shore during the summer to hook up with early twenty-somethings seems a bit off.

As someone who has flocked to the shore for a couple of summers after turning 21, I can safely say that this demographic does exist. Although their bright colored and blinding gem-stone Ed Hardy shirts could have led me to believe they were younger, they were still between the ages of 27 and 35. At first I was fascinated by these more mature men who could afford expensive rentals and had years of experience living out the quintessential Jerseyan’s summer dream.

But, the glamour of it all faded as quickly as the afternoon tide. I started to realize on a Sunday at Martell’s Tiki Bar in Point Pleasant that all of the men looked weathered and aged. Many were cloaked in tattoos and walked around hitting on all the young 22-year-olds. I used to be flattered by the occasional drive-by compliment they would deliver such as “wow you are beautiful,” or “dude, check out her awesome smile,” but I slowly realized they told every female there they were just as “beautiful” and had just as great a smile.

I started to realize that these men can afford lavish summer houses and getting a round of drinks for all of the ladies because they are, in fact, working professionals. They are established in their careers since college, which would mean they have been working for a decade. Naturally, younger women are drawn to this status and maturity like moths to a light. If only they could take an extra second to realize that light is 30-years-old and at this point in life should be focusing on solidifying a meaningful relationship, maybe even creating a family of lights. Okay, I will stop with the light reference.

The shore must be a place where professional men go where they can continue to live out the bachelor lifestyle without feeling guilt or societal pressure–a place where they never have to grow up… Neverland! They have entered the modern day version of the place created in the early 1900s by Scottish author Sir James Matthew Barrie. Of course, this world was made more popular by the stylish 2-D images of Disney. Maybe it is just the Peter Pan Syndrome, Garden State-side. These men can defer committing themselves to the right person and starting a family by remaining in the ultimate playground.

Neverland is often used as a metaphor to represent eternal childhood, immortality, and escapism. I realized that day at Tiki that most men there were actually lost boys. And, with other 30-year-old males present, it reinforces that they are not alone and can continue frequenting the beach to hit on the “fresh meat.” The tri-state area mentality might also reinforce this habit, as everyone is trained to focus on a career after college. Men have learned they can continue living out their college days, except now they are boys with bank accounts.

Now I make a general claim, not every 30-year-old going to the shore is like this. Just, most of them! And the entire Jersey shore area is NOT like the show. There are mainly three locations that the Guidos flock to in the summer: Seaside, Belmar and Manasquan. Although these are nice towns, they have bars that welcome fist-pumping and leopard prints. The shore stretches from Sandy Hook around Exit 105 to Cape May at Exit 1. That’s about 100 miles, with only two exits harboring the “Snookis” of the world.

Either way there are areas of the shore that are beautiful – they consist of immaculate three-story houses equipped with private beaches, a family of five riding their bikes with their Ralph Lauren polos to the local ice cream parlor, marshes that go on for days filled with wildlife that you only see in a Planet Earth episode. These sights are dispersed throughout the entire coast, and get overshadowed by the surrounding areas that bring in all of the bad press.

Nonetheless, I am just saying I have done my research. So, if you take a trip to the shore as a 23-year-old you can be sure to find more mature or matured-looking men. If Pauly D is your dream boy, I mean, man that you want to settle down with, then girlfriend get your spray tan on and apply those fake eyelashes because you are in luck. You might need to just wait four more years for him to want to settle down.