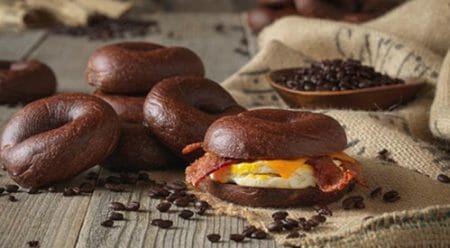 (PCM) Colorado-based bagel chain Einstein Bros have recently revealed their newest creation with the Espresso Buzz Bagel and it promises a morning wake-up call. The new bagel is chock full of caffeine, 32 mg to be exact, which is equal to about a third of the amount that is in a standard cup of coffee. While the Espresso Buzz bagel may not give you the same pick-up as your full cup of coffee, it certainly works as a grab and go option for something a little different.

In addition to the caffeine the Espresso Buzz Bagel features 13 grams of protein and the chain claims that the caffeine that makes up the bagel is sourced from both espresso and coffee-cherry flour. As coffee lovers, we are just curious about the taste. It looks like it would be pretty good, but sometimes looks can be a bit deceiving. The new bagel is part of Einstein Bros. new line of Boosted Bagels, which feature unique and innovative recipes.

The Espresso Buzz bagel is one of three bagel options that are currently available right now. The others include the sweet, oat-topped Cherry Chia Bagel and the Savory Parm Bagel and the company plans to introduce even more additional options in the future. While the company claims that the Boosted Bagels will only be available for a limited time, if they sell well enough the company doe say they will consider making them a permanent menu option.