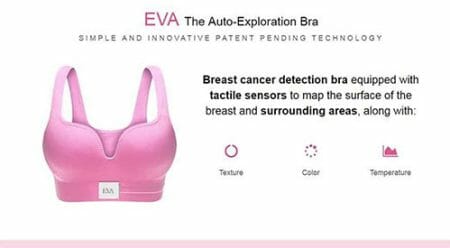 (PCM) Julián Ríos Cantú is an 18-year old student from Mexico and his invention of a ‘miracle bra’ has the potential to save the lives of millions of women by being able to detect the early signs of breast cancer.  Cantú’s own mother battled breast cancer for many years and eventually had to undergo a double mastectomy. Cantú developed the idea for the the bra, which he is calling “”the auto exploration bra” after watching his mother’s struggle and knowing just how hard it can be for women in Mexico to have access to get a mammogram. Apparently, there are only 9.5 mammography machines per million people in the country.

Cantú’s invention uses 200 sensors that are able to detect the early signs of breast cancer. Those include texture, color and temperature of the breast. The bra does not need to be worn by the user at all time to be effective. It can be worn for just one hour per week and that is enough time for the sensors to analyze the breast and detect any important changes. The information obtained by the bra is sent to a computer or smartphone app via Bluetooth technology where it is then analyzed by a neural network.  Heat sensors are able to detect blood flow, which can suggest that blood is feeding the formation of cancer cells.

Cantú has formed his very own company called Higia Technologies and has already taken first place at the Global Student Entrepreneur Awards and won the $20,000 top prize. According to the Higia website they are “devoted to boosting women’s quality of life by attaining a professionalization of the self exploration method for the early and effective detection of breast cancer.” Let’s hope that we will see this “miracle bra” device put into wide release as it truly does have the potential to save millions of lives.

This entry was posted in Health, Health & Fitness, Lifestyle, News