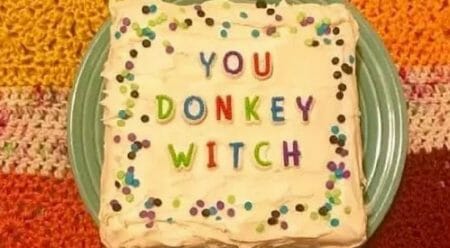 (PCM) A bakery in New York is taking revenge on internet trolls in the sweetest way possible by sending them back cakes featuring their very own hateful messages! Troll Cakes Bakery and Detective Agency is based in Brooklyn and they have come up with this quite novel concept.

For a mere $35 fee you can serve your enemies a sweet slice of revenge by having Troll Cakes investigate the individual causing you grief online and give them a taste of their own medicine. If you know the perpetrators mailing address, you hand it over to Troll Cakes and they will send their comments right back to them decorated on top of a cake.

The $35 price covers baking the special cake, having it decorated with the “troll” words and having it delivered straight to their door! We only wish they could find a way to film some of the reactions! Now that would be truly hilarious!

For the mere price of $60 you get all the services listed above, but the Troll Cakes Bakery and Detective Agency will actually put their investigative skills to use and hunt down the address for any anonymous trolls that are targeting you online and then they too can be dished with sweet revenge.

The company does have a disclaimer stating that “not all cases will be accepted” and it is at the bakery’s determination and discretion.

All cakes sent out feature the troll’s original comment or social media post inside the box and they are copied exactly (grammatical errors included) on top of the cake as well. The cakes ship to anyone in the United States and the bakery offers an in-person delivery service for New York recipients.